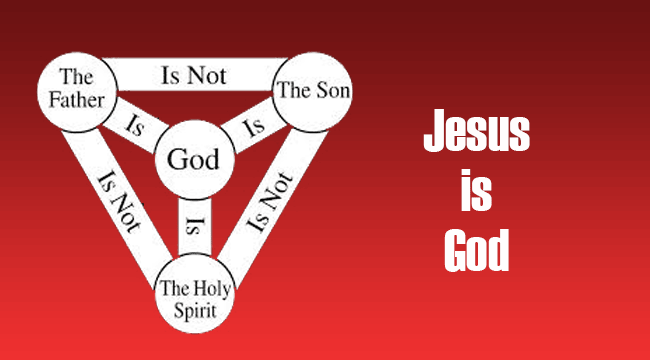 He was not created by the Father. He did not exist in the Father, and then brought out of the Father. He was not made from the essence of the Father. He is not the angel Michael transfigured. Jesus is God. He is the incarnate eternal Son, the Word of God made flesh, and the second person of the Trinity. The Son has always been, is, and always will be.

Luke 22:63-65, “63 Now the men who were holding Jesus in custody were mocking Him and beating Him, 64 and they blindfolded Him and were asking Him, saying, “Prophesy, who is the one who hit You?” 65 And they were saying many other things against Him, blaspheming.”

How can the men be committing blasphemy by saying many other things against Jesus Christ, unless He is in fact God? This one section of scripture proves that Jesus Christ is God. If this is not enough for you, there are more.

Hebrews 1:6-10, “6 And when He again brings the firstborn into the world, He says, “AND LET ALL THE ANGELS OF GOD WORSHIP HIM.” 7 And of the angels He says, “WHO MAKES HIS ANGELS WINDS, AND HIS MINISTERS A FLAME OF FIRE.”8 But of the Son He says, “YOUR THRONE, O GOD, IS FOREVER AND EVER, AND THE RIGHTEOUS SCEPTER IS THE SCEPTER OF HIS KINGDOM. 9 “YOU HAVE LOVED RIGHTEOUSNESS AND HATED LAWLESSNESS; THEREFORE GOD, YOUR GOD, HAS ANOINTED YOU WITH THE OIL OF GLADNESS ABOVE YOUR COMPANIONS.” 10 And, “YOU, LORD, IN THE BEGINNING LAID THE FOUNDATION OF THE EARTH, AND THE HEAVENS ARE THE WORKS OF YOUR HANDS;”

Was Paul a liar, was he wrong, was God’s word wrong, or are you wrong? Paul preached that Jesus is God, not a part of God, not a smaller god, but actually the God of all creation. God the Father in this section of scripture calls Jesus God. Was God a liar, was He wrong, or are you wrong? Why would God share the worship of His angels with a creature? He wouldn’t. When He commands His angels to worship the Son, they are worshiping God. Exodus 34:14, “for you shall not worship any other god, for the LORD, whose name is Jealous, is a jealous God”

John 20:26-29, “26 After eight days His disciples were again inside, and Thomas with them. Jesus came, the doors having been shut, and stood in their midst and said, “Peace be with you.” 27 Then He said to Thomas, “Reach here with your finger, and see My hands; and reach here your hand and put it into My side; and do not be unbelieving, but believing.” 28 Thomas answered and said to Him, “My Lord and my God!” 29 Jesus said to him, “Because you have seen Me, have you believed? Blessed are they who did not see, and yet believed.”

2 Peter 1:1, “1 Simon Peter, a bond-servant and apostle of Jesus Christ, To those who have received a faith of the same kind as ours, by the righteousness of our God and Savior, Jesus Christ:”

How else do you explain his greeting here at the beginning of his epistle? Again, this is not just Peter writing this, but it is God using Peter to write God’s own word.

Titus 2:11-15, “11 For the grace of God has appeared, bringing salvation to all men, 12 instructing us to deny ungodliness and worldly desires and to live sensibly, righteously and godly in the present age, 13 looking for the blessed hope and the appearing of the glory of our great God and Savior, Christ Jesus, 14 who gave Himself for us to redeem us from every lawless deed, and to purify for Himself a people for His own possession, zealous for good deeds. 15 These things speak and exhort and reprove with all authority. Let no one disregard you.”

Here Matthew records that Jesus accepted worship. As we already established, only God is to be worshiped. Jesus did not rebuke them like the angels did when men tried to worship them. Whey do you think that is? I’ll tell you. Jesus is God. If you don’t acknowledge the deity of Christ, you are a heretic. If you teach others to believe the lies you believe, you are also a false teacher. A created Jesus is a creature who would be powerless to save us. Jesus is a hypostatic union of deity and humanity.

Matthew 28:8-10, “8 And they left the tomb quickly with fear and great joy and ran to report it to His disciples. 9 And behold, Jesus met them and greeted them. And they came up and took hold of His feet and worshiped Him. 10 Then Jesus said to them, “Do not be afraid; go and take word to My brethren to leave for Galilee, and there they will see Me.””

Revelation 5:11-14, “11 Then I looked, and I heard the voice of many angels around the throne and the living creatures and the elders; and the number of them was myriads of myriads, and thousands of thousands, 12 saying with a loud voice, “Worthy is the Lamb that was slain to receive power and riches and wisdom and might and honor and glory and blessing.” 13 And every created thing which is in heaven and on the earth and under the earth and on the sea, and all things in them, I heard saying, “To Him who sits on the throne, and to the Lamb, be blessing and honor and glory and dominion forever and ever.” 14 And the four living creatures kept saying, “Amen.” And the elders fell down and worshiped.”

Jesus is being worshiped along with the Father by the angels, and elders. Do you understand? What argument can be made that will stand against the word of God?

Philippians 3:20-21, “. 20 For our citizenship is in heaven, from which also we eagerly wait for a Savior, the Lord Jesus Christ; 21 who will transform the body of our humble state into conformity with the body of His glory, by the exertion of the power that He has even to subject all things to Himself.”

Colossians 2:2-3, “2 that their hearts may be encouraged, having been knit together in love, and attaining to all the wealth that comes from the full assurance of understanding, resulting in a true knowledge of God’s mystery, that is, Christ Himself, 3 in whom are hidden all the treasures of wisdom and knowledge.”

Jesus is also omniscient. Only God is the source of all knowledge. Jesus is God.

Matthew 28:16-20, “16 But the eleven disciples proceeded to Galilee, to the mountain which Jesus had designated. 17 When they saw Him, they worshiped Him; but some were doubtful. 18 And Jesus came up and spoke to them, saying, “All authority has been given to Me in heaven and on earth. 19 “Go therefore and make disciples of all the nations, baptizing them in the name of the Father and the Son and the Holy Spirit, 20 teaching them to observe all that I commanded you; and lo, I am with you always, even to the end of the age.””

Here we not only see that the Son, and the Spirit are equated to the Father, but we also see the omnipresence of Jesus in His own divine nature that was joined to the human nature at the incarnation.

Of course, then there is the coup de grâce of John 1:1-5, 14, “1 In the beginning was the Word, and the Word was with God, and the Word was God. 2 He was in the beginning with God. 3 All things came into being through Him, and apart from Him nothing came into being that has come into being. 4 In Him was life, and the life was the Light of men. 5 The Light shines in the darkness, and the darkness did not comprehend it.” “14 And the Word became flesh, and dwelt among us, and we saw His glory, glory as of the only begotten from the Father, full of grace and truth.”

It is evident that Jesus is the incarnation of the second Person of the Trinity, and that He is eternal God.