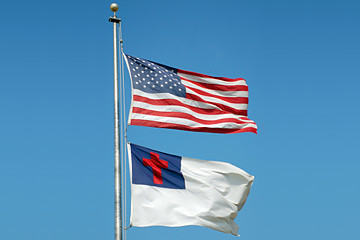 Let’s be careful not to conflate patriotism with our faith.  While we understand the political ideals behind sayings like, “America first!” We must understand and realize that we are not primarily Americans.  We are Christians first.  We are citizens of God’s kingdom first.  It is a fine thing to want to strengthen our country’s moral fabric, economy, defenses, industry, agriculture, and infrastructure, but Let’s not lose sight of whose kingdom we truly should be serving.  God’s word says, “…“But seek first His kingdom and His righteousness, and all these things will be added to you.…”  Matthew 6:33 NASB  Don’t be worried or anxious about America’s position in the world, or its greatness.  Our needs are not provided for by being American.  They are provided by God.  Worrying about our status as Americans, at the expense of the truths of the Christian faith, is a serious detriment to both.  So go ahead and be patriotic, and remember to preach the gospel to everyone you can.  Live to seek God.  Seek what He has said is good, righteous, and just.

After all, A Christian America, is a great America! 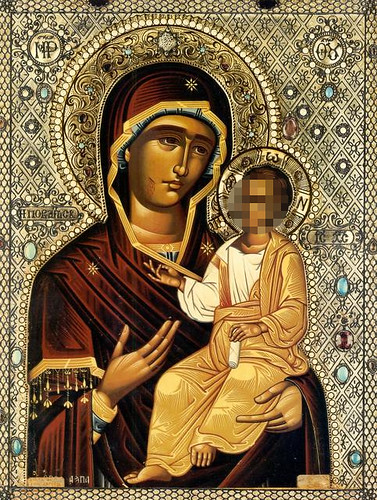 I attended my Son-in-law’s baptism in to the Eastern Orthodox Church. I wasn’t sure what to expect. I was aware that they utilized icons, and relied heavily on extra-biblical traditions in the practice of their faith. If we are honest, very many Churches practice traditions that are not in the Bible. They aren’t necessarily wrong, but they are also not necessarily right. I am not a member of the E.O.C. I had some questions about some of the traditions I witnessed. I asked around, and everyone was quite eager to answer my questions. They were pleasant, and friendly. I had a nice time talking with several of the folks after the baptism and first communion. I also took some free booklets home with me for further reading.

One of the booklets I took was titled, “No Graven Image” by Jack Sparks, Ph.D. I figured that this would be geared towards a person who was not familiar with their traditions and should give at least a rudimentary explanation of their tradition of using icons. I was correct. Although I didn’t find any of the explanations very compelling.

A painted picture, of a Biblical scene, for people to appreciate, is different than bowing to, kneeling in front of, praying to/through, or kissing a picture, as if you are doing it to the person depicted. Christian themed art is not the same as venerated icons. I am not willing to say that every person in the E.O.C. views and understands icons the same. I am also not willing to say that all of them are idolaters. I am willing to say that I don’t agree with the blurring of lines that comes along with calling it, honoring, or veneration.

I want to make it simple. If you believe that you can pray to a dead person to have them pray for you, you are wrong. Christ is our intercessor. We pray to Him. We don’t need a Priest. The office of Priest is also fulfilled by Christ. Of course, that is a topic for another discussion. If you kiss the picture of Jesus, while thinking and feeling like you are kissing the real Jesus, you are wrong. I also don’t agree with their use of Mary icons. I didn’t get a booklet for that. I did ask about it though. They esteem Mary in excess. Not like the Roman Catholic’s do, but still more than I believe they should. If you think that looking at an artistic rendering of Jesus, is going to help you have a deeper experience of faith, I would posit that perhaps you don’t have a high enough view of scripture.

Jack Sparks argues that as Christians attempt to emulate Jesus, or Paul that they should also use icons to help them. I disagree. Sparks says, “When Orthodox Christians honor an icon of one of the saints by bowing before it, they are intent upon the godly example of that saint and upon following that example.” I don’t see any value in what he asserts. I think we should derive our knowledge of their character and behavior from scripture. We know of them from scripture. It is their character and behavior we emulate. We don’t use icons for that. We use the word of God.

There was no direct Biblical support provided to justify the tradition of icons. The scriptural support cited as evidence in the booklet had little to nothing to do with the topic of idolatry or in justifying the Eastern Orthodox position. Sparks also cited works of some early Christians as historical support for their traditions. I can always do the, “My church father can beat up your church father thing” but that would be counterproductive. Just because they did it in the past doesn’t mean we should still be doing it. I can understand how in a time before mass circulation of printed books, how they would rely more on pictures to tell a story. I get it, but it is not the same. It has taken on a ritual of its own. It has become idolatry, even if it didn’t start out that way. There are some within the E.O.C. who don’t use the icons in an idolatrous manner, but I think that it is a detriment to the faith. I think it is a tradition that needs to go away. We have the fullness of God’s word, given by progressive revelation over the years. It is the most printed book in the world. It is widely available in many languages, even for free from different ministries. We should be reading it, and regarding the content therein, as much higher and better than pictures.

The booklet compares people’s misplaced respect of Pastors, or the Bible, to the Eastern Orthodox treatment of icons. Just because people do something doesn’t make it Biblical. I don’t think people should venerate the Bible, but rather the contents of it. It contains the word of God. I don’t agree with respecting Pastors over any other brother. We don’t even have the title in the Church I attend. We have Elders. They are not held in any higher regard than anyone else. They are servants.

I realize many of the folks in the E.O.C. are probably very Bible literate and do in fact esteem the word of God highly. When I say that they don’t have a high enough view of scripture it is in comparison to their desire to experience their faith in some other manner. It is as if there is something they feel is missing from the practice of their faith. They find something about the traditions of the E.O.C. fulfilling. I think if God’s word were more to them, they wouldn’t have the desire to feel their faith. I could be completely wrong here. This is just my opinion.