Have you ever felt like you are not an adult, like you are just pretending to be your idea of what an adult is? Do you wonder if the others are going to see through your facade and know that you are just playing at being an adult? My standard of what a man should be has always been my Father. He has been dead for about 4 years now. I know he would tell me he is proud of me, and that I’ve become the man he hoped I would be. He never showed us any doubt. He was always so outwardly confident, or perhaps that is the way it seemed to a child’s perception. I know he did have doubts and fears. I know he confided in his Wife. I have done the same thing. I wonder though, if the strength he portrayed to us wasn’t there, what kind of man would I be? Because of my Father, I can safely say, I am a more godly man than I would have been without Him. Because of His example, I took several, I mean several leaps of faith to do what I thought would have been the right thing, the thing Dad would have done, or been proud of. Ladies, this can apply to you and your godly mothers as well. I know my Dad wasn’t perfect, and he made mistakes that he privately regretted, but he was as good a Father to me and my Brother as he could have been. Now that Dad is gone, I don’t feel alone, or on shaky ground. Why? Because I’ve got another Father. A perfect Father who is not flawed. I have a Father who gave me and my Brother, and our Mother, the perfect man to accomplish His will in our lives. Dad might not have been the adult that we saw with our little eyes, and thought of with our childish minds, but he was the man that God used to bring us to Him. Dad was strong and compassionate, he was hard and thoughtful, he was self-sacrificing and forgiving. It was so much easier for me to see the character of Christ in a man most people would have called marginally Christian, than in many who put on a good show of being an adult. God the Father, in His perfect knowledge and sovereignty, “causes all things to work together for good to those who love God, to those who are called according to His purpose.” Because of who God the Father is, I had the human Father He wanted for me. He used my Dad to lead one of His elect to Him. I was so lost as a young man. I loved myself more than anything or anyone else. I loved my own pleasures, and hated those who would deny me. Now because of the memories of my Father, and the testimony of the Word of God, and the Holy Spirit, I am a partaker in God’s grace. I have been adopted by the true Father of all who are born again. I and my Dad, are brother’s in Christ. I hope to see him again in eternity, and worship the Lord Jesus, with him as well. I hope and pray that my Brother, and his family, my oldest Step-Son, my present, and future Grandchildren, and all of you will be with us to, as brothers and sister, unified in love, and the love of Christ Jesus. We all have doubts and fears in life. We are uncertain at times, but look to God, fix your eyes on Jesus, and what He did for you in His life, crucifixion, and resurrection. There is one God, and only one way of salvation, it is Jesus Christ. Repent of your sins, and believe. He will grant you new life and make you a new person, just like He did for me. I’m not always assured and confident in my position, but I am so confident and sure of God, and because He is good, I know that whatever I go through in life is for my sanctification. It is to shape me into the the adult man, that He wants me to be. I hope that when I am dead, the people whom God has given me to be with will be able to say the same about me that I have said about my Father. 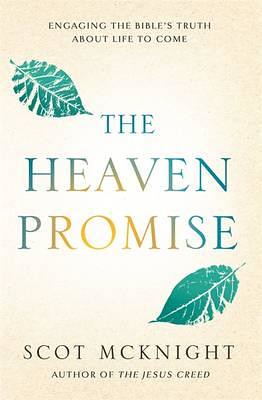 There are plenty of books out on Heaven currently.  This is one among them.  Scot Mcknight is a talented writer.  His book is interesting to read.  I can agree with much of what he said, if I give him the benefit of the doubt in some areas.

The difficulty I have with Christian books is that I look for books that will add value to the Christian’s library.  In the world of Christian books, I read works of scholarly endeavor, and works for the laymen.  In those two groups I apply the same standard, “Does this book rise above the current crop and add value to my library?”  Both categories are flooded, and in my opinion encumbered by copious amounts of average to damaging works.  Every once in awhile I run into a book that does add value to my library.  I heartily recommend those books.  In the laymen’s category, I loved, “Crazy Love” by Francis Chan.  I also loved, “The Holiness of God” by R. C. Sproul.  In the scholastic category, I relished, “Evangelical Influences” by J. I. Packer.  Books like those don’t come around often.

To answer the question formulating in your mind, “Nope, this isn’t one of them.”  Like I said above,  “Scot Mcknight is a talented writer.”  Unfortunately, this book just sets in the middle of the field.  This book was  not aimed at scholars.  It was aimed at the average Christian.  It kept things pretty simple.  It is obvious that Scott leans a little to the left theologically.  He seems like, “emergent lite.”  He obviously thinks Calvinists are wrong.  (Read page 174)  He quotes John Henry Newman and Richard Foster.  One is a Roman Catholic, and the other is an emergent Church mystic.  He makes speculations based on only four options expressed by Jerry Walls, about how God ensures that everyone, even the dead get to hear the gospel.  He does this without ever really presenting the gospel.  The four presupposed options are severely lacking.  This is done on pages 160, 161.

In Chapter 23 he claims purgatory is a doctrine that has divided the Church.  To that I can only shake my head in astonishment.  Unless, in his horrible ecumenism he thinks the Roman Catholic Church is part of the catholic faith, he is including them as Christian.  It also seems that he is teaching that we do things for an eternal reward primarily.  He fails to teach that we should be doing things primarily for the glory of God.  We know that there are rewards for us in Heaven, but that should not be our primary motivation for doing things that are pleasing to God.  He also seems to place an undue amount of importance on the environment.  I don’t know if he understands that God is going to destroy the world with fire.  He tends to speculate where scripture is silent.

So if you are looking for a book on Heaven, that will add value to your library, purchase, “Heaven” by Randy Alcorn instead.  “The Heaven Promise” by Scot McKnight is just mediocre.  It has some problems.  It gets some stuff right, but ultimately it is just o.k.