Prophet, Priest, and King.
Jesus is the fulfillment of the office of Prophet. We need no more revelation other than the word of God made flesh. He has revealed God the Father to us. We have the mind of God in His word for us. The progressive revelation of scripture is Theopneustos θεόπνευστος or God breathed. All Scripture is inspired by God and profitable for teaching, for reproof, for correction, for training in righteousness; so that the man of God may be adequate, equipped for every good work. (NASB Strong’s) 2 Timothy 3:16-17 He is our Priest, making useless all human men who would claim to be Priests. For there is one God, and one mediator also between God and men, the man Christ Jesus, (NASB Strong’s) 1 Timothy 2:5 who is the one who condemns? Christ Jesus is He who died, yes, rather who was  raised, who is at the right hand of God, who also intercedes for us. (NASB Strong’s) Romans 8:34 He is our sovereign King who reigns over all for eternity from eternity past. which He brought about in Christ, when He raised Him from the dead and seated Him at His right hand in the heavenly places, far above all rule and authority and power and dominion, and every name that is named, not only in this age but also in the one to come. And He put all things in subjection under His feet, and gave Him as head over all things to the church, which is His body, the fullness of Him who fills all in all. (NASB Strong’s) Ephesians 1:20-23 And on His robe and on His thigh He has a name written, “KING OF KINGS, AND LORD OF LORDS.” (NASB Strong’s) Revelation 19:16
1 Prophet
For those nations, which you shall dispossess, listen to those who practice witchcraft and to diviners, but as for you, the Lord your God has not allowed you to do so.
“The Lord your God will raise up for you a prophet like me from among you, from your countrymen, you shall listen to him. This is according to all that you asked of the Lord your God in Horeb on the day of the assembly, saying, ‘Let me not hear again the voice of the Lord my God, let me not see this great fire anymore, or I will die.’  The Lord said to me, ‘They have spoken well. I will raise up a prophet from among their countrymen like you, and I will put My words in his mouth, and he shall speak to them all that I command him.  It shall come about that whoever will not listen to My words which he shall speak in My name, I Myself will require it of him. But the prophet who speaks a word presumptuously in My name which I have not commanded him to speak, or which he speaks in the name of other gods, that prophet shall die.’  You may say in your heart, ‘How will we know the word which the Lord has not spoken?’  When a prophet speaks in the name of the Lord, if the thing does not come about or come true, that is the thing which the Lord has not spoken. The prophet has spoken it presumptuously; you shall not be afraid of him. (NASB Strong’s) Deuteronomy 18:14-22
2. Priest
The Lord says to my Lord:
“Sit at My right hand
Until I make Your enemies a footstool for Your feet.”
The Lord will stretch forth Your strong scepter from Zion, saying,
“Rule in the midst of Your enemies.”
Your people will volunteer freely in the day of Your power;
In holy array, from the womb of the dawn,
Your youth are to You as the dew.
The Lord has sworn and will not change His mind,
“You are a priest forever
According to the order of Melchizedek.” (NASB Strong’s) Psalms 110:1-4
3. King
Why are the nations in an uproar
And the peoples devising a vain thing?
The kings of the earth take their stand
And the rulers take counsel together
Against the Lord and against His  Anointed, saying,
“Let us tear their fetters apart
And cast away their cords from us!”
He who sits in the heavens laughs,
The Lord scoffs at them.
Then He will speak to them in His anger
And terrify them in His fury, saying,
“But as for Me, I have installed My King
Upon Zion, My holy mountain.”
“I will surely tell of the decree of the Lord:
He said to Me, ‘You are My Son,
Today I have begotten You.
‘Ask of Me, and I will surely give the nations as Your inheritance,
And the very ends of the earth as Your possession.
‘You shall  break them with a rod of iron,
You shall shatter them like earthenware.’”
Now therefore, O kings, show discernment;
Take warning, O judges of the earth.
Worship the Lord with  reverence
And rejoice with trembling.
Do homage to the Son, that He not become angry, and you perish in the way,
For His wrath may soon be kindled.
How blessed are all who take refuge in Him! (NASB Strong’s) Psalms 2 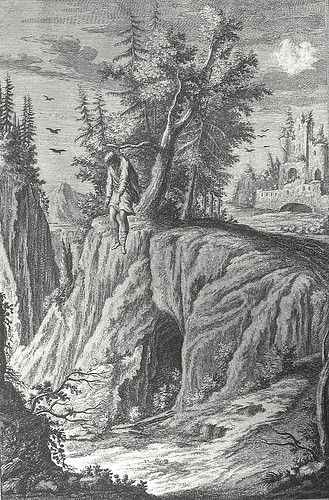 Sin, harmartia (ἁμαρτία), missing the mark of God’s perfect holiness, this is why we suffer. We are born spiritually stillborn, under the curse of the fall. We are the descendants of Adam, and in Adam have inherited a sin nature. Due to the curse, we are under the noetic effect of sin. Sin has effected every aspect of our being. We don’t perceive rightly with our senses. We don’t reason rightly with our faculties, and we don’t communicate rightly with our expressions. We are not true. God is perfect in all of His ways. When a person says that they believe in the doctrine of Total Depravity, they aren’t saying, “I can do nothing good.” They are saying, “Everything about me, has been affected by sin. Through and through, my every attribute is perverted from what was communicated during the creation.” When God created us in His image, He communicated many of His attributes in a lesser way, consistent with our nature as creatures. Original sin broke that image. So God can use us to do good things, but we are not good. We can be altruistic, but even that is tainted, or colored by our pervasive sinfulness. So the next time you want to attack the doctrine of Total Depravity as Calvinist heresy, perhaps you should do a study in hamartiology. Maybe you’ll learn just how depraved you are, and hopefully, it will magnify how much you need the Savior. When the breech is impassable, you have no hope except that which the Savior Christ Jesus has wrought in His atoning sufferings on the cross. Soli Deo Gloria!