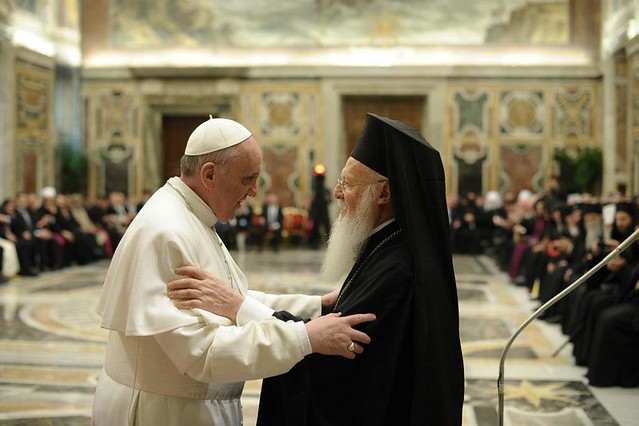 In the Easter Orthodox Church’s pamphlet titled, “Call No Man Father” written by Fr.(Father) J. Richard Ballew, and published by Conciliar Press, the author presents a straw man argument to easily dispute. He claims that Protestants believe that we don’t call anyone Father because we don’t think any man should be recognized as our, “spiritual father.” Here is what he wrote …“They, of course, are interpreting “father” in this Scripture to mean, “spiritual father.” Therefore, they refuse to call their clergymen “father,” preferring instead such titles as “pastor,” “reverend,” or perhaps even “brother.”…

He misrepresented our position either unintentionally erring, or intentionally lying. I don’t know, so I’ll give him the benefit of the doubt, and assume he simply erred. Protestants don’t call their preaching elders, “Father” because we don’t have an authoritative titular role for leaders, or teachers in the Church. This is what is being condemned in Matthew 23:8-10. This is explained by the context of what Christ had said. Matthew 23:1-12, (NASB)

“1Then Jesus spoke to the crowds and to His disciples, 2saying: “The scribes and the Pharisees have seated themselves in the chair of Moses; 3therefore all that they tell you, do and observe, but do not do according to their deeds; for they say things and do not do them. 4“They tie up heavy burdens and lay them on men’s shoulders, but they themselves are unwilling to move them with so much as a finger. 5“But they do all their deeds to be noticed by men; for they broaden their phylacteries and lengthen the tassels of their garments. 6“They love the place of honor at banquets and the chief seats in the synagogues, 7and respectful greetings in the market places, and being called Rabbi by men. 8“But do not be called Rabbi; for One is your Teacher, and you are all brothers. 9“Do not call anyone on earth your father; for One is your Father, He who is in heaven. 10“Do not be called leaders; for One is your Leader, that is, Christ. 11“But the greatest among you shall be your servant. 12“Whoever exalts himself shall be humbled; and whoever humbles himself shall be exalted.”

As you can plainly see from the context provided, Jesus is explaining how the Pharisees had wrongly taken for themselves titles and positions of authority, while sinfully using them to hypocritically burden everyone else with rules. Jesus was instructing His followers to not recognize men like the Pharisees of the Jews as their authority, but instead to recognize God as the authority. Within the Church there are no authorities other than what God has revealed in His word. We don’t hold traditions of having a man called a Father as the head of our local Church body.

The Eastern Orthodox has conflated their preaching elders (πρεσβύτερος presbuteros) with a position of authority. They say they are calling the preaching elder of a church, “father” as a term of affection, but in practice it isn’t that way. Their practice demonstrates that they are doing that which Christ in scripture forbids. On the other hand, Protestants do have all kinds of elders in our body. We have men who preach, teach, evangelize, and administrate to name a few. There is not one that is more important than the other. We can even have more than one preaching elder in any one given local Church. Some teach and preach, others serve by administrating church affairs. 1 Corinthians 12:24-26 (NASB)

We also recognize that sometimes men are thought of as someone’s father in the faith, as a man who was their personal friend and helper. Paul is mentioned as being Timothy’s father in that sense. Timothy learned from Paul. In a sense he could be considered his spiritual father, not in a mystical way, but simply in the role of a mentor in the faith, the man who preached and taught the gospel of Christ to you. 1 Timothy 1:2 (NASB)

“2To Timothy, my true child in the faith: Grace, mercy and peace from God the Father and Christ Jesus our Lord.”

The other types of elders are all under the same conditions. None of them are to be regarded as holding a position of authority over us in the same fashion the Pharisees did over the Jews.

Then Ballew goes into a self-refuting argument about traditions of the Rabbis and how they added their own ideas to them, of course the Eastern Orthodox aren’t guilty of that lol. I would find it quite laughable if it weren’t so sad to see so many people locked into a works righteousness religion akin to Roman Catholicism.

He did get some things right. In regards to the Rabbis exalting themselves and abusing their authority, he rightly condemns that and agrees with Christ.

In the end he uses the word father instead of elder. He still affirms in practice the wrong use of the word and has attributed it to a position of authority that is not warranted by scripture.  The bottom line is the same as my last article on the Eastern Orthodox Church.  They have a low view of scripture and a misplaced submission to their traditions.

One thought on “Call No Man Father, and the Eastern Orthodox Church.”