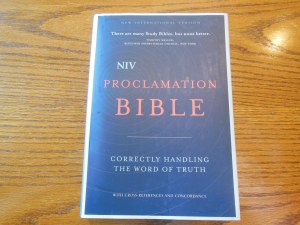 On the front of the dust jacket of this Bible, the testimonial from Tim Keller is featured, “There are many Study Bibles, but none better.”  This is very misleading.  I have no idea why this quote is featured.  I would hope that there is some good reason why Zondervan did this.  Unfortunately, I can think of one and none has been provided.  This is most definitely not a Study Bible.  It is simply a Reference Bible with Book introductions, Concordance, and Maps.  In no twist of the imagination could this be considered a Study Bible.  If you are looking for a Study Bible, this is NOT one.

My guess, in my opinion, is that Zondervan knows the NIV has taken a serious hit, and as a result has a black eye.  It no longer has the credibility it once enjoyed.  It is not as popular as it once was.  Back in 2011 Zondervan released this gender inclusive mess of a dynamic equivalent in an attempt to sneak it by everyone.  They had the TNIV, and simply dropped the, “T” and changed a few more things to further comply with the translation agenda.  The Southern Baptist Convention caught on to what was happening and officially disavowed the translation.  Here is their resolution,

“WHEREAS, Many Southern Baptist pastors and laypeople have trusted and used the 1984 New International Version (NIV) translation to the great benefit of the Kingdom; and

WHEREAS, Biblica and Zondervan Publishing House are publishing an updated version of the New International Version (NIV) which incorporates gender neutral methods of translation; and

WHEREAS, Southern Baptists repeatedly have affirmed our commitment to the full inspiration and authority of Scripture (2 Timothy 3:15-16) and, in 1997, urged every Bible publisher and translation group to resist “gender-neutral” translation of Scripture; and

WHEREAS, This translation alters the meaning of hundreds of verses, most significantly by erasing gender-specific details which appear in the original language; and

WHEREAS, Although it is possible for Bible scholars to disagree about translation methods or which English words best translate the original languages, the 2011 NIV has gone beyond acceptable translation standards; and

WHEREAS, Seventy-five percent of the inaccurate gender language found in the TNIV is retained in the 2011 NIV; and

WHEREAS, The Southern Baptist Convention has passed a similar resolution concerning the TNIV in 2002; now, therefore, be it

RESOLVED, That the messengers of the Southern Baptist Convention meeting in Phoenix, Arizona, June 14-15, 2011 express profound disappointment with Biblica and Zondervan Publishing House for this inaccurate translation of God’s inspired Scripture; and be it further

RESOLVED, That we encourage pastors to make their congregations aware of the translation errors found in the 2011 NIV; and be it further

RESOLVED, That we respectfully request that LifeWay not make this inaccurate translation available for sale in their bookstores; and be it finally

RESOLVED, That we cannot commend the 2011 NIV to Southern Baptists or the larger Christian community.”

Shortly after the Lutheran Missouri Synod did the same.  Here is the most important part of their statement as I see it,

“We find the NIV’s Committee on Bible Translation decision to substitute plural nouns and pronouns for masculine singular nouns and pronouns to be a serious theological weakness and a misguided attempt to make the truth of God’s Word more easily understood. The use of inclusive language in NIV 2011 creates the potential for minimizing the particularity of biblical revelation and, more seriously, at times undermines the saving revelation of Christ as the promised Savior of humankind. Pastors and congregations of the LCMS should be aware of this serious weakness. In our judgment this makes it inappropriate for NIV 2011 to be used as a lectionary Bible or as a Bible to be generally recommended to the laity of our church. This is not a judgment on the entirety of NIV 2011 as a translation—a task that would require a much more extensive study of NIV 2011—but an opinion as to a specific editorial decision which has serious theological implications”  You can read the entire statement here.

Here is a link to an excellent paper in the Westminster Theological Journal.   The article was written by Dr. Vern Poythress of Westminster Theological Seminary.  Dr. Poythress was also part of the Translation Oversight Committee for the English Standard Version.  By prominently featuring Timothy Keller’s testimonial on the front of this Bible edition Zondervan is trying to do some damage control.  As most of you know Tim Keller also was faculty at Westminster Theological Seminary.  He and Poythress share much in the field of theology.  By getting his stamp of approval on this Bible I believe they were hoping to bring some of us back.  Admittedly, the only reason I requested this Bible for review, over the other ones offered is that his name was on the front.  I was curious if something had changed for the better.  I was disappointed.  Not only was this the same NIV, with all of the gender inclusive language, but it was NOT a Study Bible.

As far as the physical attributes of this Bible go, it is a pretty average to above average publication.  It is blue hard back.  It has a dust jacket.  It is printed in China.  It has two mediocre silver ribbon book markers.  It is a sewn, case bound book binding.  It is printed on good quality paper that is pretty opaque.  The type is clear and uniform.  It is 9 point font.  There is limited ghosting.  It is a double column, paragraph format, with references, concordance, and 14 color maps.  It is nothing special, nothing distinctive, just a good quality hardback.  If only they would revert back to the 1984 NIV and leave these other agendas behind. 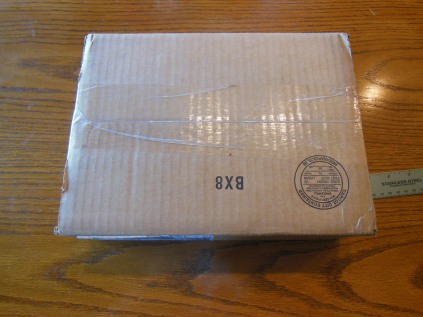 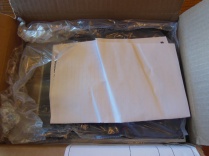 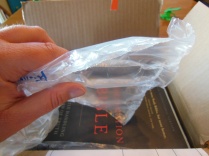 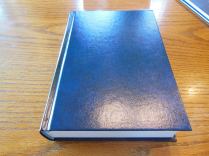 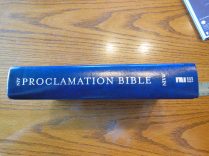 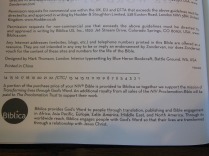 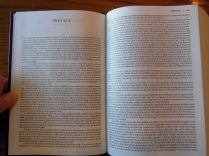 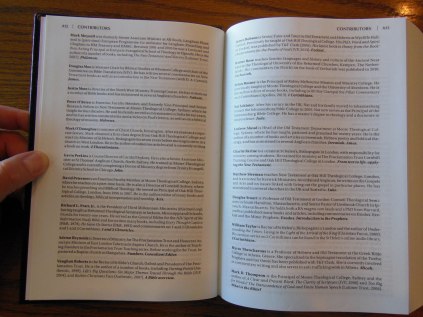 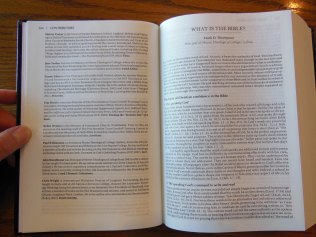 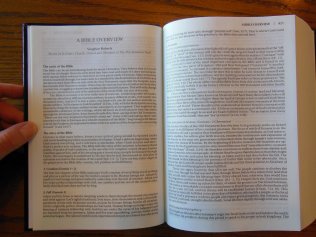 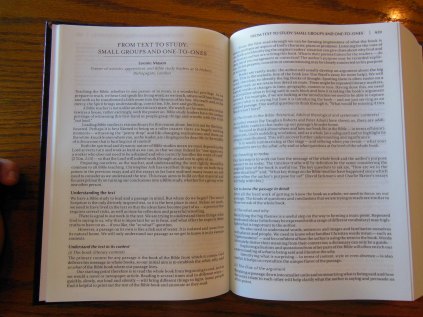 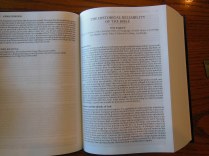 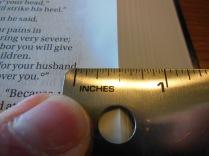 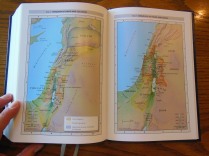