“This man will not be your heir; but one who will come forth from your own body, he shall be your heir.” 5 And He took him outside and said,

[Notice the Word is referred to as, “He.”  What did He do?  He, “took him outside and said…”  How can anyone look at these verses and not come to the conclusion that the Word of the Lord is God, and how can they, in light of John 1:1-18 not see that Jesus is the Word and He is God?]

“Now look toward the heavens, and count the stars, if you are able to count them.” And He said to him, “So shall your descendants be.” 6  Then he believed in the Lord; and He reckoned it to him as righteousness. 7 And He said to him, “I am the Lord who brought you out of Ur of the Chaldeans, to give you this land to possess it.”

If this isn’t enough, I’ll post some more later on.  Study the word, to know the Word, and His intent.  Knowing Him is knowing God.  To know God, and be known by Him, to be His adopted child and heir, is to be saved by this Triune God’s grace according to His sovereign will, regenerating and indwelling by His Spirit, and the justifying work on the cross of His Son.

I don’t know how many times I’ve heard the same accusation from Jehovah’s Witnesses, Mormons (LDS), and Muslims.  They claim that Jesus is not God, but a god, good man, prophet, teacher, and so on.  I think it is great that we can always go to the word of God to let it make the defense.  Charles Spurgeon was quoted as saying, “The Word of God is like a lion. You don’t have to defend a lion. All you have to do is let the lion loose, and the lion will defend itself.”  I agree with him.

In Genesis 15:1-2 we see that the word of the LORD came to Abram in a vision. Now, you don’t hear a vision. You see it. Some people would insist that this is just Abram hearing God speak to him, but this is actually the preincarnate Christ appearing to Abram in a vision, and speaking to him. Abram said, “…O LORD God…” or אֲדֹנָי ’ăḏônây; an emphatic form of âḏôn; or (shortened) אָדֹן ’adon; from an unused root (meaning to rule); sovereign, i.e. controller (human or divine): — lord, master, owner. Compare also names beginning with “Adoni-”.; the Lord (used as a proper name of God only): — (my) Lord. In this section of God’s word ăḏônây is used in conjunction with יְהוָֹה yhwh; (the) self-Existent or Eternal; name of God: — the Lord. So essentially he is saying, Adonai YHWH or Sovereign eternal self-existent one and only true God.  It is obvious that Abram believed the word of the LORD to be the one true, eternal, and self-existent God.

We can look at John 1:1-18 and see who John said the Word of God is. Again, it is obvious that Jesus is the Word.

John 1:1-18 (NASB) 1  In the beginning was the Word, and the Word was with God, and the Word was God. 2  He was in the beginning with God. 3  All things came into being through Him, and apart from Him nothing came into being that has come into being. 4  In Him was life, and the life was the Light of men. 5  The Light shines in the darkness, and the darkness did not comprehend it.
The Witness John
6 There came a man sent from God, whose name was John. 7  He came  as a witness, to testify about the Light, so that all might believe through him. 8   He was not the Light, but he came to testify about the Light.
9 There was the true Light which, coming into the world, enlightens every man. 10 He was in the world, and the world was made through Him, and the world did not know Him. 11 He came to His own, and those who were His own did not receive Him. 12 But as many as received Him, to them He gave the right to become children of God, even to those who believe in His name, 13  who were born, not of blood nor of the will of the flesh nor of the will of man, but of God.
The Word Made Flesh
14 And the Word became flesh, and  dwelt among us, and we saw His glory, glory as of the only begotten from the Father, full of grace and truth. 15 John *testified about Him and cried out, saying, “This was He of whom I said, ‘He who comes after me has a higher rank than I, for He existed before me.’” 16 For of His fullness we have all received, and grace upon grace. 17 For the Law was given through Moses; grace and truth were realized through Jesus Christ. 18  No one has seen God at any time; the only begotten God who is in the bosom of the Father, He has explained Him.

Jesus is not a god like the Mormons say.  He was not Michael the angel transfigured like the Jehovah’s Witnesses would tell you.  He was not just a prophet like Muslims claim.  If there is any doubt now that Jesus is the Word, and the Word is God, it is not due to lack of evidence.  It is due to disbelief.  May God grant you true and saving faith in the Savior, Jesus Christ our Lord and God. 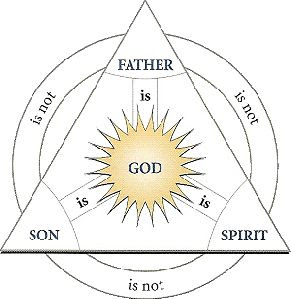 There are no other true gods anywhere. There are none in other solar systems. There are none on any other planets. There is no true god except for the God of the Bible, and He is triune. If you deny these truths, you are not Christian, but an idolator! You have made up a god to believe in, and you are in a very very very bad sin. Believing in the wrong god will not save you. It will damn you to Hell! Please repent of your Mormon beliefs! I love my LDS friends, and desperately don’t want you to go to Hell. Some of you, who I maintain ties with, are exceedingly nice people. I’d love for you to become true brothers in Christ.

The Bible says the god of this world is Satan.  The Bible is clear that there is only one true God.  He created everything.  That includes all solar systems and worlds.  Logic dictates that there would have to be one original originator.  If there were many gods there would be no true god among them.  God cannot share His power with other gods, nor can He be known as many gods.  He is one God in trinity.

For the Jehovah’s Witnesses, and Assemblies of Yahweh cult members, repent of your Aryanism! You and the Mormons share this in common.  You believe that Christ is not the second personage of the Trinity, but rather a created being. You believe in a lie. You must repent! Read the Old Testament, keeping an eye out for the Christophanies. If you do that, you will see Christ from the beginning. Read John 1:1-14. How can you study the Bible and believe such lies about Christ our God, Saviour, Lord/Master κῦρος, Prophet, Priest, Prince, and King?

“Thus says the LORD, the King of Israel and his Redeemer, the LORD of hosts: ‘I am the first and I am the last, And there is no God besides Me. ‘Who is like Me? Let him proclaim and declare it; Yes, let him recount it to Me in order, From the time that I established the ancient nation. And let them declare to them the things that are coming And the events that are going to take place. ‘Do not tremble and do not be afraid; Have I not long since announced it to you and declared it? And you are My witnesses. Is there any God besides Me, Or is there any other Rock? I know of none.'”

Proof-texting is the practice of quoting a verse, or verses from the text of the Bible, to support, or refute a doctrine.  This practice has been used by the orthodox and the heretic.  The dangers of proof-texting are varied and manifold.  With proper presuppositions proof-texting can be a valuable tool for supporting orthodox doctrines.

With this presupposition when they run into texts like John 3:16 “…For God so loved the world, that He gave His only begotten Son, that whoever believes in Him shall not perish, but have eternal life…”  They wrongly understand the word, “begotten” to mean that Jesus was the progeny of the Father.  They then, in turn use this as a proof-text for their false doctrine that deny the eternal deity of Jesus, in stark disregard for His proclamation of being the, “I Am.”  This, in turn requires more eisegesis, and proof-texting, in an attempt to refute the true doctrines, in conflict with their false ones.  When apologetically engaged with a heretic or cult member they are usually more than thrilled to proof-text ad nauseum.  This can quickly become counterproductive.  If this is done in a public forum it can be disastrous.  The onlookers could be convinced of the heretical doctrines.

Our apologetics should be from a capable well rounded understanding of the entire Bible in its own context.  It should be founded on the presupposition that the Bible is the truth, and the authority, on What God has to say to man.  When we start with a true presupposition, and are exegetical in our reading of the Bible, we can proof-text like Paul to the Jews in Hebrews.  When proof-texting is done correctly it can win people’s minds to the truths of the Bible.  There is nothing like a good section of scripture quoted in context at the right time to hammer home sound doctrine.  God’s word is authoritative and when we speak truthfully with the authority of scripture it is a powerful thing to witness.