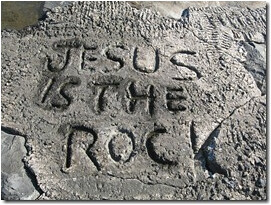 “ 13Now when Jesus came into the district of Caesarea Philippi, He was asking His disciples, “Who do people say that the Son of Man is?” 14And they said, “Some say John the Baptist; and others, Elijah; but still others, Jeremiah, or one of the prophets.” 15He said to them, “But who do you say that I am?” 16Simon Peter answered, “You are the Christ, the Son of the living God.” 17And Jesus said to him, “Blessed are you, Simon Barjona, because flesh and blood did not reveal this to you, but My Father who is in heaven. 18“I also say to you that you are Peter, and upon this rock I will build My church; and the gates of Hades will not overpower it. 19“I will give you the keys of the kingdom of heaven; and whatever you bind on earth shall have been bound in heaven, and whatever you loose on earth shall have been loosed in heaven.” 20Then He warned the disciples that they should tell no one that He was the Christ.”

He wasn’t talking about making Peter the first Pope, nor was He talking about the Roman Catholic’s claim to Apostolic succession.  He was saying, they may call you Peter the rock, but I’m the true rock, the chief cornerstone, or foundation stone, that I will build my Church on.  Then He tells all the Apostles, “I will give you the keys of the kingdom of heaven; and whatever you bind on earth shall have been bound in heaven, and whatever you loose on earth shall have been loosed in heaven.” 20Then He warned the disciples that they should tell no one that He was the Christ.”

If you don’t believe me, look what Peter had to say about it in 1 Peter 2.

4And coming to Him as to a living stone which has been rejected by men, but is choice and precious in the sight of God, 5you also, as living stones, are being built up as a spiritual house for a holy priesthood, to offer up spiritual sacrifices acceptable to God through Jesus Christ.

6For this is contained in Scripture:
“BEHOLD, I LAY IN ZION A CHOICE STONE, A PRECIOUS CORNER stone,
AND HE WHO BELIEVES IN HIM WILL NOT BE DISAPPOINTED.”

7This precious value, then, is for you who believe; but for those who disbelieve,
“THE STONE WHICH THE BUILDERS REJECTED,
THIS BECAME THE VERY CORNER stone,”

8and,
“A STONE OF STUMBLING AND A ROCK OF OFFENSE”;
for they stumble because they are disobedient to the word, and to this doom they were also appointed.

I think from this it pretty obvious what He meant.