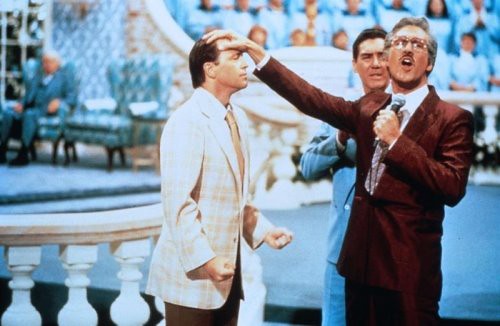 Turns out the parable about the persistent widow in Luke 18 is not about annoying God into giving you what you want.  I know, that isn’t what you’ve been told.  I have heard it myself, “Folks let me tell ya whata.  If you are in need it is because you aren’t being persistent in petitioning Goda!  If you’ns would just get on your knees, and just ask Goda to give you the money for a new pickup, and do it every daya He would answers your prayers just like He’d done for that poor wida woman.  Can I geta amena!”

Now He was telling them a parable to show that at all times they ought to pray and not to lose heart, saying, “In a certain city there was a judge who did not fear God and did not respect man. “There was a widow in that city, and she kept coming to him, saying, ‘Give me legal protection from my opponent.’ “For a while he was unwilling; but afterward he said to himself, ‘Even though I do not fear God nor respect man, yet because this widow bothers me, I will give her legal protection, otherwise by continually coming she will wear me out.'” And the Lord said, “Hear what the unrighteous judge *said; now, will not God bring about justice for His elect who cry to Him day and night, and will He delay long over them? “I tell you that He will bring about justice for them quickly. However, when the Son of Man comes, will He find faith on the earth?”
[Luke 18:1-8 NASB]

So you see that this parable is more about how God will answer the faithful prayers of those who are suffering injustice because He is just.  God is not an unjust judge.  He is the perfectly righteous and just judge.  As such, He does not act in anyways unfair.  “will not God bring about justice for His elect who cry to Him day and night, and will He delay long over them?”  Then to drive the point home Jesus says, “I tell you that He will bring about justice for them quickly.”  So you see, this isn’t a method to twist God’s arm to get Him to give you what you want.  After all we are told to not repeat prayers like the pagans in Matthew 6:7 “”And when you are praying, do not use meaningless repetition as the Gentiles do, for they suppose that they will be heard for their many words.
[Matthew 6:7 NASB]”

This brings up another question though.  What is meant by meaningles repetition?  Well I can tell you for sure it isn’t when you are in the throws of suffering and you are crying out to God for relief, and praying over and over for His help.  That kind of praying is what you should be doing.  We are talking about long winded, scripted or non-scripted prayers that are not from the heart, but rather to make you appear spiritual, or for any other purpose than the proper use of prayer.

I am not telling you to only pray once to God when you are deeply troubled.  If that is what you are getting out of this you are missing the point.  The point is don’t follow the prosperity preachers in some twisting of scripture as a formula for extorting God.  Got it Skippy?  Good.