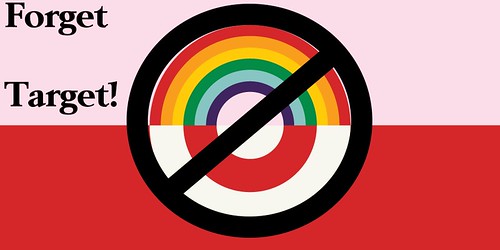 How can anyone look at their statement, and not see the extreme hypocrisy behind it?  This seems like a no-brainer to me.  Here is a quote from their site, “…Inclusivity is a core belief at Target. It’s something we celebrate. We stand for equality and equity, and strive to make our guests and team members feel accepted, respected and welcomed in our stores and workplaces every day…”  Let’s look a bit more closely at this.  First, they insist that “Inclusivity is a core belief at Target.”  Now remember, inclusivity is their justification for allowing men in the ladies’ room and women in the men’s room.  To most reasonable people inclusivity would imply that Target allows everyone from every walk of life to shop at their stores without prejudicial treatment.  They provide public restrooms for their patrons to relieve themselves.  So to be true to their policy, they should either do away with restrooms, offer only a universal public restroom, or offer separate restrooms for every type of pseudo-gender that any insane person identifies as.  Those are pretty much your options if you insist on identifying as, “inclusive.”

The first solution is not practical.  As part of good customer service people expect to have access to a public restroom.  The second option would be fine, but they would have to have several separate, self-contained unisex bathrooms, that only could be occupied by one person at a time, each.  This is not as burdensome and impractical as the last option.  In that case, every time someone imagined a new gender, Target would have to install and label a new restroom just for their newly sinfully imagined gender.  The sin addled mind is incapable of making righteous use of reason.

Of course, there is the fourth option.  They could just do what they are doing right now.  They are taking the discriminatory, bigoted, hateful, intolerant, exclusive, and hypocritical approach. They force the 99.8% of the public, who identify as either male or female to fall in line with the new morality.  Which by the way, is neither new nor moral.

Here is another quote from their site, “…We believe that everyone—every team member, every guest, and every community—deserves to be protected from discrimination, and treated equally. Consistent with this belief,Target supports the federal Equality Act, which provides protections to LGBT individuals, and opposes action that enables discrimination…”  They say that they believe in absolutes.  You can see this when they say, “everyone, every team member, every guest, and every community.”  but this isn’t what they really mean.  Sure they say it and it sounds good, but it isn’t the truth.  They are lying to us.  It is impossible to do what they are saying.  When you have communities with world views that make mutually exclusive statements, you can’t equally affirm them all.  Ultimately you will affirm some of them over the others, and that is what Target has done.  they are affirming the anti-Christian, secular, satanic, sinful, destructive, death culture worldview, over its antithesis.  In so doing, they have prejudicially discriminated against all who oppose the worldview they affirm and have acted to exclude them from consideration in regards to their beliefs.  They have upheld the beliefs of the perverse over the moral and called it good while denigrating anyone who criticizes them as evil.

The left has created this insane notion that reality doesn’t matter and there is no absolute truth.  It is obvious that there are only two genders.  The problem is that we should have never engaged them in the conversation or used their terminology.  It should still be considered a crime for a man to go into the ladies’ room.  It should be a crime to do a sex change surgery.  It should definitely be against the Hippocratic oath.

Since we allowed the discussion, we somehow gave some sense of legitimacy to their argument.  As soon as this issue came forward we should have laughed in their faces, refused to discuss it, kept things the way they were, and walked away.

I get it.  Sinful people are hurting.  They need real help.  Not this insanity.  You don’t give a suicidal person a knife.  We have to do what is good for crazy people because they aren’t competent enough to know what is good for them or to want it.  They need to be regenerated by God and saved from their sins.  They need counseling and help not mutilation by surgeon.  Most of all they need Jesus.