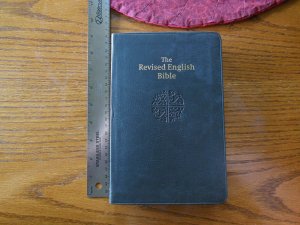 Out of curiosity, I requested a copy of the REB from Cambridge.  I typically don’t like synthetic covers.  I was curious about the translation and the quality of the synthetic cover that Cambridge used on the REB.  I am glad I took the time to look it over a while.  Some have called the REB the UK’s equivalent to the NIV here in America.  I would have to agree, but with an exception.  I think the REB and the 2011 and newer NIV’s are similar.  They both employ some gender neutral/accurate/inclusive language.  I call it gender neutral, agenda driven translation when words are not directly translated into their English counterparts when they are available.  This is done in the NRSV extensively and for the sake of being inclusive rather than accurate.  That bothers me.  How can anyone consider it a good scholastic translation when an agenda like that has driven its translation?  There are the gender accurate ones like the NET Bible.  Where they just correct some translation errors that versions like the KJV have.  I don’t have a problem with that, as long as they are doing it for the sake of being accurate, and not for political correctness.  After all, we are to conform to the word not the other way around.  The REB doesn’t change as much as the NRSV or the NIV, but it does make an effort to be more gender neutral than what I think is acceptable.  Keep in mind, I think that if it is a correction it is acceptable, but if it is for the sake of being, “inclusive” it is not.  So that leaves us with the REB.  Kind of a, “middle of the road” little guy.

Being neither theologically conservative or liberal has placed this Bible in obscurity.  Roughly half of any given American Church is made up of liberals and the other half conservatives. We can see this demonstrated via the litmus test of gay marriage.  When a Church accepts it, about half of the people leave.  God even says He’d rather we be hot or cold instead of lukewarm.  So fence sitting isn’t a good place to be.  I’d suggest that the powers that be make this a dynamic equivalent that adheres to accurate gender pronouns, or they toss 2000 years of orthodoxy and just put in whatever pronouns they please.  I’m sure that would make the liberals happy.  After all, who are we seeking to please, God or man?  So when the Bible says something like, “man” in reference to, “mankind” and the word is translated directly as, “man” with the understood connotation in English as, “mankind” leave it, “man” don’t change it to, “mankind, humans, or people.”  We aren’t stupid.  We know from context that the meaning is all of mankind.  Anyone who would mistranslate something for the sake of inclusivity or societal acceptance should not be translating the Bible.

It’s not that this is a bad translation.  A person could get saved reading it.  It gets the concepts across.  It isn’t as bad as the NRSV or NIV.  It doesn’t mess things up near as much as they do.  It is just not what it could be.  I’d love to see a very conservative dynamic equivalent. The 1984 NIV was good.  The REB could be better, but as it is I don’t think it will ever be that popular in America.  There will always be a more conservative or liberal choice out there.  There really isn’t much room for one that sits between.  It is funny to me that the very things that this Bible lists as selling features on the back of the slipcase are the things that would stop me from buying it.  They would also stop about half of the Church goers in America from buying it.

Another concern I have is the ecumenism involved for this translation.  I noticed that there were Roman Catholics involved with the translation.  That put me off right away.  There are many theologically liberal people in America who consider Roman Catholics to be fellow Christians.  I don’t know how anyone can study the RCC Catechism and come to that conclusion.  It is obvious that they do not hold to Biblical teachings as authoritative.  Consider that when the Pope speaks ex cathedra, what he says trumps the Bible.  Magisterium or RCC tradition also seems to trump the Bible.  We haven’t even mentioned Mariology.  So the squishy ecumenism is a reason for concern.  Keep in mind that I am very opinionated.  I am firmly in the conservative camp.  I have my own allegiances.  You might not agree with me or my conclusions about this translation, but that is alright.  That is what we call tolerance people.  We can disagree and not lop of peoples heads, burn a city, or politically pressure people into silence.

Now that we have dealt with the translation let’s look at the quality of construction.  It was printed by CPI William Clowes in the U.K.  William Clowes Ltd. is a British printing company that was founded by William  Clowes in 1803.  They printed reference books and catalogues.  They have been in the printing business for quite a while.  We might not be familiar with them here.  I am satisfied with the quality of this Bible.  I was a bit concerned when I read that the paper was recycled.

I thought perhaps it wouldn’t be opaque enough or maybe it would be to brittle or easy to tear.  Thankfully none of that was true.  The Bible was sent to me in an easy to open cardboard box along with the ESV Clarion that I reviewed here.

Both Bibles arrived undamaged and in good condition from Cambridge.

The REB comes in a stout slipcase.  It looks like it should hold up well.  Keep it for storing your Bible in. 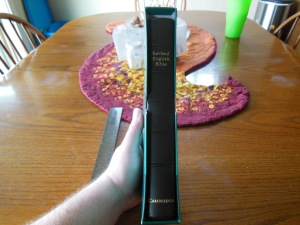 Once I had the Bible out of its case I was quite anxious to look the cover, binding, and paper over.  This is the first synthetic covered Bible from Cambridge that I have reviewed.  The cover looks a lot like leather and handles like a leather cover for the most part.  It appears that attention was paid to the details.

The corners look good, the vinyl liner is glued down well, the binding is sewn, but it is a bit stiffer than a luxury Bible.

It takes some breaking in.  Since it does have a sewn binding it will be nice after it is broke in.  There is a design stamped into the front.  I have no opinion one way or the other about it.  There is one ribbon marker, page edges are gilded, and the weight and size make this convenient for taking with you to Church. 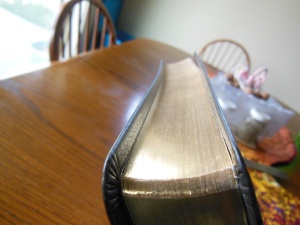 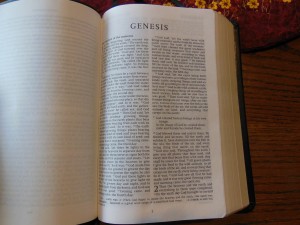 The paper is less flexible than the paper used by Jongbloed on the other Cambridge Bibles I’ve reviewed.  It seems a bit more stiff.  Like the cleaner put extra starch in your shirt.  The pages are off white and the font is nicely printed in 8 point, “Swift” typeface.

There is a, Preface, Measures and Weights, and a Presentation Page, at the beginning of this Bible.  Even though I am not a fan of the translation there is nothing wrong with the quality of this Bible.  They did a good job of putting together a durable Bible with a synthetic cover and recycled paper.  The retail price online is too high for a Bible with a synthetic cover.

I don’t foresee that many Americans shelling out their hard earned dollars for a synthetic leather cover and recycled paper.  For the same amount they can get a Bible with genuine leather, albeit pigskin leather, and a sewn binding.  So if Cambridge wants this Bible to make it in America they should either go full liberal or full conservative, put a leather cover on this, and by all means kill some trees.  After all we aren’t going to destroy the planet like the Emergent church lunatics tell us.  God will destroy it with fire like He says in His word.  (disclaimer-I am not advocating and abdication of our God ordained duties of being in dominion of the Earth and the creatures thereof.  I am asserting that quality paper for the word of God to be printed on is an honorable end for a tree.  I was also attempting humor.)

***Addendum 02/18/15  “On a technical point the paper used in the REB is not ‘re-cycled’  –  The FSC (Forest Stewardship Council) reference denotes that the wood pulp used in the making of the paper comes from forests that are environmentally managed (cut trees replaced by new) and where the supply chain can be clearly identified  i.e. we can be confident that no illegal logging has been involved. Although ‘re-cycled’ is mentioned, it does not form a part of this particular sub-group of papers.” *** 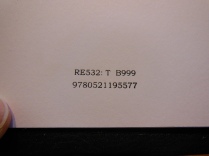 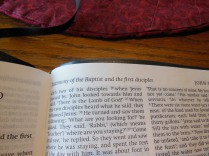 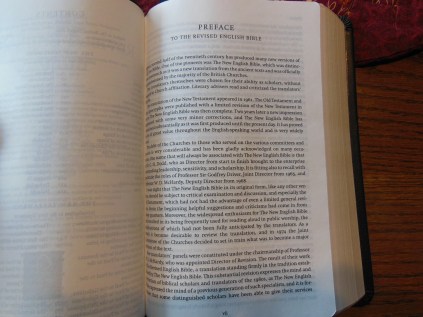 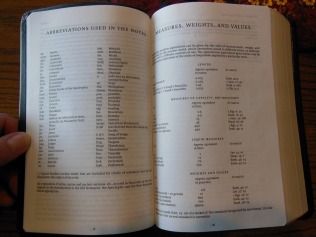 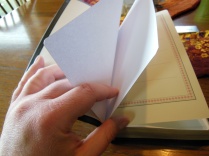 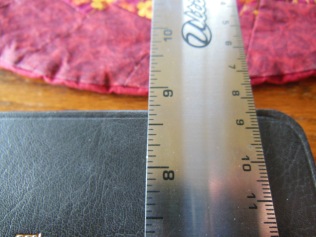 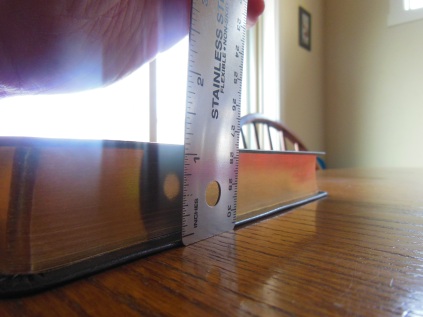 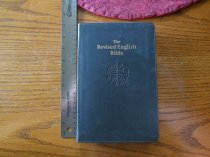 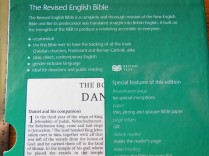 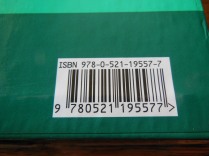 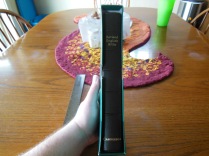 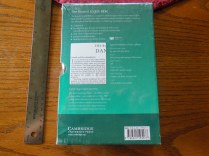 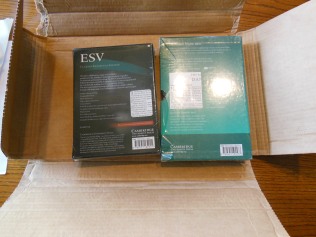 4 thoughts on “The Revised English Bible or REB, an odd thing here in the States.”