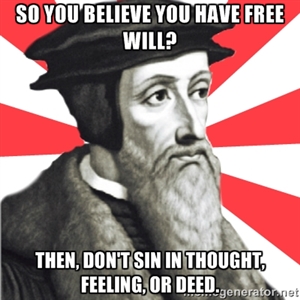 Why don’t we have a problem when God chooses people in some scriptures, but when it comes to salvation we say, “God is a gentleman and would never force us to choose Him against our freewill!”

For instance in Acts 40 we don’t have a problem with God choosing who would see Him after the resurrection.  “39“We are witnesses of all the things He did both in the land of the Jews and in Jerusalem. They also put Him to death by hanging Him on a cross. 40“God raised Him up on the third day and granted that He become visible, 41not to all the people, but to witnesses who were chosen beforehand by God, that is, to us who ate and drank with Him after He arose from the dead.”  (Acts 10:39-41)

But, in Ephesians 1:3-5 when Paul tells us how God chose who would be saved by Jesus before He made the world everybody gets all offended about having their precious sinful, I mean ahem, “freewill” getting violated.  Excuse me, but I’d much rather have a divine intervention and go to Heaven than have a, “freewill” any day.  That is because I understand that before regeneration and justification my will is a sinful will, a curse from the fall, a will that is enslaved to do nothing but evil continuously.  After all aren’t we supposed to pray that the will of the Father be done?  Aren’t we supposed to become more like Jesus and less like ourselves?  Aren’t we supposed to die to ourselves daily and take up the cross of Christ?  It sure seems like our wills should be replaced with God’s will.

I think the problem lies in the sin of pride.  People think to highly of themselves and their abilities to please God, they don’t see how sinful their sin is, and they definitely don’t contrast it with the holiness and righteousness of God.  They need to see God as completely transcendent, totally other, instead they have to elevate man and lower God to protect their notion of freedom.  We should magnify God and humble ourselves.

I’m not saying that we are not responsible for our sin either.  People try to say that it is a mutually exclusive statement.  They say if you don’t have our brand of freewill then God can’t hold you responsible for your sin.  It seems to make sense.  Of course you would have to lower God and elevate man.  We are still morally culpable for sin because we are born sinners and choose it continuously because of our state of being dead in our sins and being slaves to our sin natures.  When God saves someone of His grace and mercy it is exactly that way.  He saves them by His grace (unmerited favor).  They did nothing to deserve salvation.  Matter of fact, everything they have done has come from a corrupted heart.  If God planned it this way then we as creatures have no right to judge Him or His plan.  He owns us and has all rights to us.  He would be just in destroying all of us whenever He wants to.  The fact that He saves any of us is wonderful news.

We make choices that are consistent with our natures.  God is consistent with His attributes.  God cannot be unjust, or evil, or untrue.  In the same way a sinner cannot be desirous of God while yet a slave to their sinful nature.  (Romans 5:8) “But God demonstrates His own love toward us, in that while we were yet sinners, Christ died for us.”  In their sinful nature they make all kinds of choices that are consistent with that nature.  These choices are allowed by God in His sovereign will to be used by Him for good in accordance with His will.   I would remind you that the problem is pride and how we see God, ourselves, and sin.  He ultimately has ownership rights over all of us as Creator and can do with us as He sees fit.

19You will say to me then, “Why does He still find fault? For who resists His will?” 20On the contrary, who are you, O man, who answers back to God? The thing molded will not say to the molder, “Why did you make me like this,” will it? 21Or does not the potter have a right over the clay, to make from the same lump one vessel for honorable use and another for common use? 22What if God, although willing to demonstrate His wrath and to make His power known, endured with much patience vessels of wrath prepared for destruction? 23And He did so to make known the riches of His glory upon vessels of mercy, which He prepared beforehand for glory, 24even us, whom He also called, not from among Jews only, but also from among Gentiles. (Romans 9:19-24)