Let’s look a little closer at what the RCC believes about Mary.  Here is a quote from the RCC(Roman Catholic Church) Catechism that was included in a Cripplegate article;

966 “Finally the Immaculate Virgin, preserved free from all stain of original sin, when the course of her earthly life was finished, was taken up body and soul into heavenly glory, and exalted by the Lord as Queen over all things, so that she might be the more fully conformed to her Son, the Lord of lords and conqueror of sin and death.” The Assumption of the Blessed Virgin is a singular participation in her Son’s Resurrection and an anticipation of the resurrection of other Christians: In giving birth you kept your virginity; in your Dormition you did not leave the world, O Mother of God, but were joined to the source of Life. You conceived the living God and, by your prayers, will deliver our souls from death.

967 By her complete adherence to the Father’s will, to his Son’s redemptive work, and to every prompting of the Holy Spirit, the Virgin Mary is the Church’s model of faith and charity. Thus she is a “preeminent and . . . wholly unique member of the Church”; indeed, she is the “exemplary realization” (typus) of the Church.

968 Her role in relation to the Church and to all humanity goes still further. “In a wholly singular way she cooperated by her obedience, faith, hope, and burning charity in the Savior’s work of restoring supernatural life to souls. For this reason she is a mother to us in the order of grace.”

969 “This motherhood of Mary in the order of grace continues uninterruptedly from the consent which she loyally gave at the Annunciation and which she sustained without wavering beneath the cross, until the eternal fulfillment of all the elect. Taken up to heaven she did not lay aside this saving office but by her manifold intercession continues to bring us the gifts of eternal salvation . . . . Therefore the Blessed Virgin is invoked in the Church under the titles of Advocate, Helper, Benefactress, and Mediatrix.”

In the first sentence we see that Rome claims Mary was not born with a sinful nature like all other humans were after the fall.  This is false.  Mary did have a sinful nature just like the rest of us.  The RCC also claims that Mary was taken up body and soul instead of awaiting the resurrection and the judgment, and that she is the “…Queen over all things…” reasoning that in so being she would be more conformed to the likeness of Christ.  This means that she is more like Christ than any other Christian could ever hope to be.  Many in the RCC insist that the, “Assumption of the Blessed Virgin” means that she did not die, but rather was taken up like Enoch.  This is also wrong as witnesses in the first century were at her funeral and recorded it in writing.  Many other Catholics believe that she died, and here body was taken up.  “we must remember that the Patristic Fathers defended the Assumption on two counts: Since Mary was sinless and a perpetual virgin, she could not suffer bodily deterioration, the result of original sin, after her death. Also, if Mary bore Christ and played an intimate role as His mother in the redemption of man, then she must likewise share body and soul in His resurrection and glorification.”1 Much more erroneous is the insistence that this assumption was part of Christs resurrection and that of Christians who would die after them.  Regardless of whether she initially died or not, they believe that she was bodily alive either by resurrection, or not dying to begin with, when she ascended to heaven.  We read this NO WHERE in scripture.  It is solely a doctrine of man created by the RCC.  We know from the record of scripture that Christ had younger siblings sired by Joseph with his wife Mary.  This is not debatable.  The RCC claim that she remained a virgin after the conception, and birth of Christ is completely fallacious, and without merit.  They misunderstand what it means to be the mother of Jesus, and place an import on it that corrupts proper Christocentric theology, and conflates the role of Mary with that of the Savior.  This is evident by the next claim that it is her prayers that, “will deliver our souls from death.”

Understanding that they believe Mary to be perpetually sinless it follows that they would also believe that she accomplished, “complete adherence to the Father’s will, to his Son’s redemptive work, and to every prompting of the Holy Spirit,”  This ignores that Biblical fact that she was sinner, and needed a Savior just as much as the rest of us.  It is yet another contrived tradition of the RCC.  Because of this doctrine they elevate her to the model of faith and charity, thus supplanting Christ, and robbing Him of His due glory.  To further elevate her the catechism states, “preeminent and . . . wholly unique member of the Church”; indeed, she is the “exemplary realization” (typus) of the Church.  In other words when the Church is referred to in the Bible as the bride of Christ, Mary is to be understood as the fulfillment of that type instead of the Church itself, thus ostensibly setting up some incestuous relationship between Mary and Christ, equating in blasphemy.

If these blasphemous heresies were not enough, they go even further into their doctrines of the devil by stating this, “968 Her role in relation to the Church and to all humanity goes still further. “In a wholly singular way she cooperated by her obedience, faith, hope, and burning charity in the Savior’s work of restoring supernatural life to souls. For this reason she is a mother to us in the order of grace.”  This is blatantly and abjectly satanic!  The glaringly obvious and grievous error of attributing Mary with regenerative work quickening the human soul, replaces the Holy Spirit with a mere mortal woman!  In this heresy she becomes our mother due to her regenerative work.  What happened to being sons and daughters of God, through adoption?  I guess now, Mary is the wife of her son and God.  Notice the switch from, “For this reason” referring back to her, “work of restoring supernatural life to souls” to being, “mother to us in the order of grace.”  The switch is explicit in line 969.  It completely disregards the earlier clause, “for this reason” which made clear that it was addressing her regenerative work in regards to the soul.

The annunciation is the RCC tradition that surrounds the Biblical account of the angel Gabriel informing Mary of her coming conception, and motherhood to Jesus.  According to the catechism, because of her consent to this (as if she had a choice)  Evidently, due to her being the mother of Jesus, she suffered as He did during the crucifixion which earned her merit with God, and apparently still suffers until all the number of God’s elect come in.  The next sentence leaves me bewildered how anyone can read it, affirm it, and claim to be Christian.  “Taken up to heaven she did not lay aside this saving office but by her manifold intercession continues to bring us the gifts of eternal salvation”  Wow!  Who knew Mary had a saving office, and made manifold intercession?  Here I always thought there was one intercessor between God, and man, and that being the Lord Jesus Christ Himself!  Of course then there is a, “therefore” and we must ask what it is there for?  “Therefore the Blessed Virgin is invoked in the Church under the titles of Advocate, Helper, Benefactress, and Mediatrix.”  According to the RCC catechism because she is our intercessor, and savior, she must be blessed and recognized as our advocate, helper, benefactress, and mediator.  Correct me if I’m wrong, but aren’t at least a couple of those attributes of the Holy Spirit?  Just sayin’…  Come on Patrick!

Having unpacked all of that, I’m wondering how the jam pack such a small statement with so much heresy?  I am also pretty sure that is why people don’t refute it more often.  It would take them forever to get through it all.  If you obfuscate epochally enough the pile of manure you’d have to dig through to get to the bottom of it would be so large it would become its very own repellant to discovering the true extent of their lies. 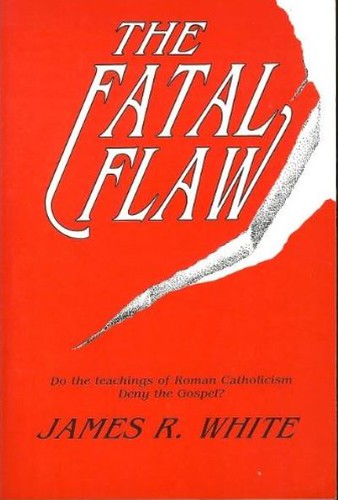 I know this book has been around a while, and it isn’t a very big book, but it is new to me, and possibly to some of you. This is such a useful book, I figured you should know too. By now I think it is obvious that I agree with much of what Dr. White writes. I find his work to be accurate, nuanced, and properly tempered by scripture. It is scholarly, includes bibliographies of cited sources, and still completely suitable for the laymen. This book is no different. Dr. White cites long tracts of text from Vatican II, and the Council of Trent. This way nobody can claim that the citations were out of context, or twisted. The focus is on the Roman mass, and purgatory, as well as the ramifications they have on the work of Christ, the gospel, the authority of scripture, objective truth, the doctrine of justification, and your eternal destination.

I would recommend this book for your Christian library. I think it distills the essential differences between the Roman works righteousness system, and the true gospel of Christ, and His imputed righteousness. This book would be great as a hand out to people who are in similar cults, like Mormonism, or Jehovah’s Witnesses. They would be able to see their own doctrine as very similar to that of the Roman system.