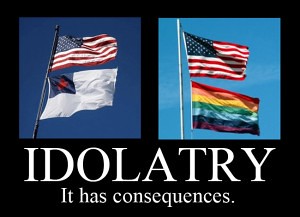 Modern American culture places a dubiously high value on individual personal happiness. This is purposefully, and directly opposed to the will of God. It is an elevation of man’s position and authority over God’s. The sinner should first and foremost seek to do the will of God and find His happiness in the peace that comes through being in God’s will. We are commanded to do what is right. Right, is not some secular consensus. It is what God has deemed right and good in His sovereign will as Creator and Sustainer of all things. To do God’s will is where we will find peace, happiness, joy, contentment, and fulfillment. We won’t find those things in any lasting or meaningful way seeking our own understanding of what happiness is. So you go ahead and try to find your happiness in the world, among things, and fleshly pleasures, and when you are empty, broken, and full of misery, remember… you did what made you happy…

If you could see all of your sin it would be unbearable. As Christians we see a sin that we committed and lament over it. Sometimes we spend way too much time beating ourselves up over it. Believe it or not, this comes from idolatry. We punish ourselves for sin as self-righteous idolaters. How dare we rob Jesus of the glory He is rightfully due? He paid for our sin debt on the cross of His crucifixion. He had the wrath of the Father poured out on Him unto completion, yet we dare to bemoan our lowly estate as victims! For those who are in Christ Jesus there is no condemnation of sin! Get up off your pity-pot and stand for Christ! See what He has done for you, not what you must do for yourself!

When we punish ourselves for failing it moves us away from Christ. Our shame and guilt stop us, or delay us from repenting. We languor in our own guilt and shame, powerless to do anything for God. We have put ourselves on the cross and on the throne of our lives. “I messed up so I must pay the price.” How ridiculous are we? How could we ever hope to pay the price for our own sin? It is this kind of narrow, short sighted view of sin that keeps us in bondage to the guilt and shame that separate us from our assurance.

What we need, is to see our sins as manifold as they are. We need to see them as God sees them. He is infinite in His authority. He is perfect in His righteousness. We can not fathom these things. Our finite minds see our occasional sin in part, never the way God sees them. He sees every… single… last… one… in… perfect… entirety… Think about this for a moment. Sinners! Don’t waste time whipping yourselves! By His stripes are we healed! It was Him upon the cross not you! Now that you see things in the proper light, don’t delay, REPENT! Go and serve your King with joy in your heart, knowing the Good God forgave you the bad sinner. All glory to God in the highest!

Pragmatism is a lack of faith.

1. character or conduct that emphasizes practicality.

2. a philosophical movement or system having various forms, but generally stressing practical consequences as constituting the essential criterion in determining meaning, truth, or value.

Here is another definition from World English Dictionary;

1. action or policy dictated by consideration of the immediate practical consequences rather than by theory or dogma.

a. the doctrine that the content of a concept consists only in its practical applicability

b. See also instrumentalism the doctrine that truth consists not in correspondence with the facts but in successful coherence with experience.

A pragmatic person relies on their experiences when making decision. Some may argue that you can be a pragmatic Christian even. They might assert that someone who has exercised faith and experienced the results of that faith and then came to trust it would be a pragmatist. The problem with that line of thinking is that the person had to have faith to make the unreasonable decision in the first place.

What is faith? Dictionary.com defines faith as;

1. confidence or trust in a person or thing: faith in another’s ability.

2. belief that is not based on proof: He had faith that the hypothesis would be substantiated by fact.

3. belief in God or in the doctrines or teachings of religion: the firm faith of the Pilgrims.

4. belief in anything, as a code of ethics, standards of merit, etc.: to be of the same faith with someone concerning honesty.

5. a system of religious belief: the Christian faith; the Jewish faith.

6. the obligation of loyalty or fidelity to a person, promise, engagement, etc.: Failure to appear would be breaking faith.

7. the observance of this obligation; fidelity to one’s promise, oath, allegiance, etc.: He was the only one who proved his faith during our recent troubles.

8. Christian Theology. the trust in God and in His promises as made through Christ and the Scriptures by which humans are justified or saved.

In this instance we are looking at faith as the ability to make decisions based on what the Bible says about God, and life regardless of how our worldly knowledge would inform us. For instance, it seems wrong to the worldly to give to others selflessly when you see them in need. The pragmatist would only give what little he could spare, and he would only do so because his conscience was bothering him, or he wanted to look charitable in the eyes of his neighbors.

Pragmatism is a big problem in the church today. I’m sure it has always been a problem in the church. We recently were part of a church split over unrepentant pragmatism. I will make the example generic. Our old Pastor retired after many years at our church. The church board hired another Pastor only to find out that his political leanings were in opposition to the majority of ours. He was orthodox in the Primary Articles of Faith. After five months the board voted to ask for his resignation. One of the reasons they gave was that the older people in the church had all of the money, and that they would leave if he didn’t. The board was afraid of losing money instead of doing what is right. They acted pragmatically. God is the source of all wealth. They didn’t operate in the realm of faith. If they had, they would have been able to see God work in the situation, and have been strengthened by it. Instead they shorted themselves and lost an opportunity. This is only one example of pragmatism in the church.

Another I can think of off the top of my head is church growth. Many Pastors fall into the thinking that they need a large congregation with lots of resources so they can accomplish their goals in ministry. They might even follow the model of entertaining goats instead of shepherding sheep. All you have to do to see this is to turn on the television and watch a Sunday sermon.

I know that it is very difficult for a person to let go of their own reasoning and have faith. I used to beat myself up because I couldn’t let God have control over my money. I thought it was ridiculous that I could trust Him with my salvation, but not with my cash. I’m not saying to tithe like in the Old Testament.  I’m not even talking about money here. This was my pragmatism shining through. I didn’t have the faith to surrender my worldly pragmatism to Him.

There are many areas of our lives where we operate out of pragmatism instead of faith.   If you think about your own life you should be able to see where you have operated from a stance of pragmatism. I encourage you all to examine yourselves for pragmatism, and ask God to forgive you. Ask Him to grant you faith to do all that is in His word. Pragmatism puts us and our reasoning on the throne instead of God. Faith is trusting God, and His word enough to live our lives based on them. Our only hope is that God will grant us that kind of faith.