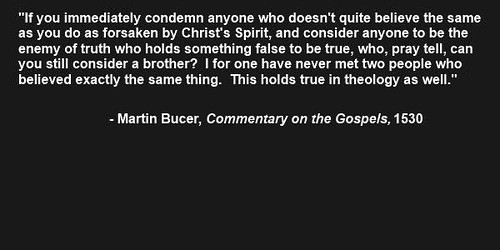 Bucer wrote extensively on ecumenism and what the differences are between good/right ecumenism and bad/wrong ecumenism.  Ecumenism is, the principle or aim of promoting unity among the world’s Christian churches.

Much like Bucer indicates, all people at one time in their lives, were material heretics, not yet privy to the error they believed, but through God’s grace, longsuffering, and patience we can trust that He will sanctify us out of it into conformity with the truth.  When a brother believes something that is in error we bear with them, in patience and grace, lovingly correcting them from God’s word.  Our hope is that the individual will move from material heresy to orthodoxy, rather than proving to be a formal heretic.  Once someone is a formal heretic, we can pray for their conversion.  God may use Satan to sift the material heretic, but the formal heretic, if he persists unto the grave, will suffer in Hell with Satan.  By no means are we to call all men, “brother” who claim to be our brothers.  Neither are we to include groups who have a different gospel, or worship a different god than the true God.  This would make them appear to be legitimate to those in the laity, or general public.

1. A movement promoting unity among Christian churches or denominations.

2. A movement promoting worldwide unity among religions through greater cooperation and improved understanding.

There is a proper ecumenism within the orthodox denominations and then there is the ecumenical movement which is not good.  It is one of unifying the body of Christ with false churches.  For instance Baptists, Presbyterians, and Methodists might get together to have a worship service including singing, praying, and communion.  They could do this because they worship the same God and agree who God is by affirming all of the same Primary Articles of Faith.  What it can’t be is orthodox denominations doing this with false churches that are apostate, or heretical and outside of orthodoxy.  For instance if we had Methodists, Baptists, Roman Catholics, and Mormons getting together to have a worship service including singing, praying, and communion.  This can not be due to the fact that the Roman Catholic Church and the LDS worship a different God than that of the Bible.  The RCC worships a god that does not save you by grace alone.  You must belong to the RCC, practice it’s sacraments, be baptized into it, and further they believe that Mary did not die but was ascended to heaven and is your co-redemtrix who brings your prayers to the feat of Christ and without her your prayers can not be heard and you can not be saved.  They also believe in an infusement of righteousness that you must maintain.  You get an initial washing and then must keep yourself saved.  This is not the same gospel nor the same God of the Bible.  The LDS believe in a god that is not the one and only god and that is not eternal.  Their god can not save you either.

Here is a good sermon from A.W. Tozer.  Even though he preached this years and years ago it is still relevant and informative.