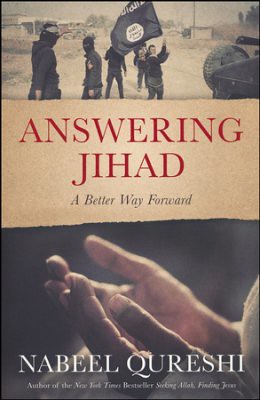 The full title of the book is, “Answering Jihad A Better Way Forward.” The majority of the book is a concise primer on Islam, and some of its doctrines. It also briefly juxtaposes some facets of Islam with corresponding aspects Christianity.

The big question, in my summation, that it answered definitively was, “Do the authoritative founding documents of Islam prescribe violence as an integral part of the practice of Islam?” It would seem that the answer is, “Yes.” He also answers another question that has got our liberal friends in a tizzy, “Do Muslims and Christians worship the same God?” Of course, this is simply answered with a resounding, “No.” by people like me. Qureshi does answer in the negative but is more diplomatic with his response. He takes some time addressing why some people might think that they do. He also explains why some Christians from other countries might use the word, “Allah” as an interchangeable word for God. As an American, this would never enter my mind, so it was interesting to learn why it would happen in other countries. Nonetheless, we should answer the liberals in this nation with a, “No.” He explains how similar does not equate to same. It is not enough to have some similar attributes and then coincidentally make it consequential.

Nabeel Qureshi takes just enough time to flesh out the truth, without weighing the reader down with minutia. He utilizes a writing style that the layman will be comfortable with while maintaining accuracy. It is a quick read, that can be read in a day. It is a good resource to hand to friends who may have new Muslim co-workers or neighbors. I agree with Qureshi’s conclusion that the best way forward is friendship, not fear. If we can take the time to understand where they are coming from, and then invite them into our culture, it would go a long way to improving relations with the moderate muslims of the world. With the help of men like Qureshi we can also spot the Muslims who are educated in the founding documents of Islam and are engaging in the prescribed violence from the quran and hadiths.

I recommend this book as a primer. Definitely, get a copy for yourself, and then give it to anyone who would be in a position to befriend muslims. I would look for any other books this author might have coming out in the future.