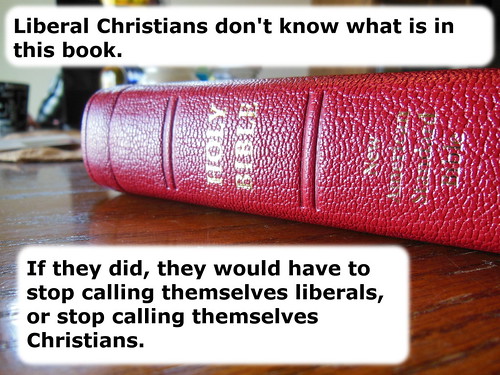 I don’t know how people can give their liberal political ideologies more authority than their self-professed faith.  It would seem that their political ideologies are more important to them than what God has said.  Let me explain.  There are many worldviews.  If you don’t like the one your parents gave you, you can always develop you own, or adopt one.  Colleges seem to be one of those places where young people adopt a different worldview.

So if someone asks, “Bob, why do you hate abortion?  It is a woman’s choice.”  I reply with, “Murder is wrong, and murdering a child in the womb because of your sexual immorality is reprehensible.”  I can say this and assert it. Because, I can build that opinion on systematic and Biblical theology.  When you read your Bible in context, and apply the proper hermeneutical method of exegesis to the text, you get doctrines.  Those doctrines provide the basis for our morality.  So, my morality is built on the doctrines of God, from His word.  So, my stance on abortion is that it is the murder of an infant in the womb, due to the sinfulness of the murdering mother.

Then we throw other beliefs about other moral issues in there like, theft, welfare, work, love, sexuality, and so on.  Guess what?  The Bible determines what I believe about all of those things as well.  Since that is the case, cumulatively they make up the ideologies of my Christian worldview, which is what I use in determining what is acceptable politically.

This seems foundationally simple to me.  I don’t understand those who sit across the aisle and defend something like abortion, or gay marriage, while still claiming Christ as their Savior.  “Doesn’t His word mean anything to them?  Don’t they want to be obedient to Him, because of the great love, and work He did to save them on the cross?  How can they afflict Him more while He hangs from the cross?”  To advocate horribly sinful, and abominable things, while claiming Christ as your Savior, is tantamount to throwing refuse on Him, while He hangs suffering on the cross.

I’ve tried to ask people like this to justify their positions Biblically for me.  I’ve never encountered one person who could do this.  There have been a few who have tried, but their usually open theist heretics, or some other very liberal theological bent that doesn’t hold the Bible as authoritative.  This gives them the wiggle room they need to pervert the word.  This is another sickening thing.  To see someone pervert and abuse the word of God.

I suppose a person could be very new in the faith, and not have the maturity to understand what they are doing.  This is why I can’t make the blanket statement that they are all unsaved heretics.  I can definitively say, that if a person persists in their sin, and loves the worldly life, and sinful cultures opinions, more than God’s, they are not saved.  I can’t do that with people I only know in passing.  It worries me drastically more when I’ve known someone for a very long time, and they are like that.

So you claim that you are pro-choice(abortion), for social programs, for big Federal government, for gay marriage, for no fault divorce, for euthanasia, for socialism, communism, pro-gun grabbers, pro-illegal immigration, and you think that God is O.K. with that?  We don’t know the same God.  The God I know is loving, but He is also just, holy, righteous, true, and He has communicated His will for us, to us, in His word.