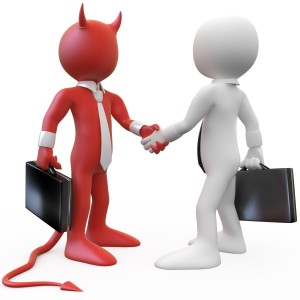 I’m sure you have all read a story, seen a movie, or television show, where the plot revolves around the main character selling his soul to the devil by signing some contract. Usually it is for fame, fortune, power over enemies, or to get the girl. Come to think of it, usually it is a combination of those things. Growing up in America during the 80’s, freedom was the centerpiece of what it meant to be an American. I never felt more free than when I was about 12 years old. I was old enough to go anywhere I wanted, as far as my bike could take me, and young enough to not have the responsibilities of taking care of myself or others. I would ride my bike to, “Black’s Bridge” and play by the river. I would take my BB gun and shoot dragon flies, or whatever else would sit still long enough. My cousin and I would catch snakes and keep them in a 5 gallon bucket, only to dump them in my mom’s bed while she slept. If I had to come up with a time in my life where I felt free, that would be it. If you wanted to be a patriotic little man, you needed freedom.

As I grew I started to feel the bands of oppression tighten around me. I needed a job. I had to pay my bills. I married a woman who had two small sons. I needed a better job. I had to be a good role model. I needed to teach the boys how to be good men. My wife and I had two daughters, so I had to be more tender and help my wife help them. I had to keep my marriage strong. No time for difficulties at work. Appliances wear out and break. Everything costs money. Unexpected surgeries send us into debt. Life starts choking the feeling of freedom away pretty quick.

I found out that the laws were overly restrictive as well.  I still don’t understand how property taxes can be legal.  I also don’t understand the legal requirement to have a concealed permit to carry a firearm.  Apparently we now aren’t free to practice our religion either.  Bake a cake or get shut down.  While babies are being denied their freedom by being aborted.  We really aren’t free in America.

Only when I started thinking spiritually about it did it start to make more sense. As a young man I was Arminian and slightly Pentecostal in my theology. I had no problem with thinking a person could sell their soul to the devil. It was theirs after all. Of course I thought it was wrong to do so, but theoretically, it could happen. I also had the sense that it was impossible, niggling at the recesses of my mind. Later in life, as God worked in my sanctification, He brought me into a fuller understanding of my sinfulness and His holiness. This in conjunction with learning more about soteriology lead me to understand that I am not my own. In fact, no human being owns themselves. We are all created by God for His glory.

Now the premise of selling your soul to the devil just seems ludicrous. You simply can’t sell what you have no rights to. God has the authority.  The problem here is that my pre-conversion soul is already a slave to sin nature, because of the fall. The devil doesn’t have to buy it. It is fallen from the start.  That doesn’t mean the devil owns it.  He is a fallen creature too.

Not to mention, the devil doesn’t have the means to purchase a single soul, nor does he have the authority to purchase one. He is a creature himself. He is under the same authority we are. Theoretically, his only purpose for purchasing a soul would be to rend it from the saving hands of Christ. Since it isn’t possible for God to lose even one of the elect, this is not a concern.

If souls could be bought and sold, we as fallen creatures would make a market out of it for sordid profit, to be sure. Ignoble and greedy, we would make slaves of souls. God in His sovereignty and providence has ensured that won’t happen. We do however; need to be rescued from the slavery that we are in before conversion, the bondage of the soul to sin. God in His sovereignty made man. He made him in full knowledge that he would fall when tempted. He made man, knowing who He would save from sin and who He would not. He made man, knowing that He would curse his progeny for the original sin, with death. All people born after the fall are born as slaves to sin because of the fall. We are all sinners and dead spiritually.

The Holy Spirit makes the elect alive according to the will of the Father, so that we can sense our sin and need. It becomes real to us. In this conviction, the elect seek reconciliation with God. In the newness of life they are driven, compelled, and ravenous, for relief of the condition of condemnation. The knowledge of our own personal sin is the impetus that drives us to the foot of the cross.

The same God who made us, who knew that we would be sinners, also made a way for us to glorify Him according to His sovereign decree. God in the second personage of the Trinity put on flesh at the incarnation, being born of a virgin, by the work of the Holy Spirit, according to the will of the Father, Christ Jesus, our Passover lamb became the vessel for the wrath of God that our sins warrant. He in obedience to the Father suffered the very wrath of God, that we deserve upon the cross, to justify us. The penalty being paid by the one who was innocent, paying the penalty for the guilty who justly deserve it. All of this was planned out from the very beginning.

I hope we can see that it is ludicrous to think for a moment that our souls are our own, and free to sell. The devil is just another creature and your soul is already a slave to sin. Our only hope is to recognize our need for a redeemer. Only God can fathom the depths of our debt. We cannot rightly perceive how sinful we are. He alone can justly account the measure of wrath we deserve and He alone can atone. So don’t delay. If God has convicted you of your sin, repent of it and believe upon Jesus’ work on the cross for your justification. Pray that God will redeem your soul from sin and you will be His for eternity.  Better to belong to God than be able to sell your soul for any worldly gain.

2 thoughts on “You Can’t Sell What’s Not Yours!”