I know some of our more charismatic friends and television sensationalists like John Hagee and Perry Stone have gone coo coo  for blood moons.  Waiting for the Shemitah to come and go can be nerve wrecking.  If the end doesn’t come they will have to make a list of all the big bad scary things that happen during the year to prove their point.  It will be the same with the blood moon.  The lack of an apocalypse will have to be explained away again.  That is the thing with making predictions and going further than what the text of the Bible actually says, you end up explaining things away out of necessity, or run the risk of having your followers leave you for the next doomsayer to fuel their fantasies.  I encourage you all to not get, “caught up” in all of the scares.  Don’t sell your house and buy a purple sweat suite with nikes and pudding just yet.  Let’s just go as far as the Bible says and not make it say things it doesn’t say, mmmkay?  There is a reason most credible theologians don’t write tons of commentary on Revelation, or other unfulfilled apocalyptic, prophetic, writings in the Bible.  It is one thing to theorize or speculate, it is another to actually teach people that God has given you some personal revelation that makes you the false-prophet du jour.  So for the love of God and His word please stop making false claims, stop getting people all upset and scared for no reason other than to profit from their fear.

Has anyone else noticed this similarity and wondered about it?

I noticed a similarity between (Deuteronomy 6:8 NASB) “You shall bind them as a sign on your hand and they shall be as frontals on your forehead.” and 1 (Revelation 13:16 NASB) “And he causes all, the small and the great, and the rich and the poor, and the free men and the slaves, to be given a mark on their right hand or on their forehead,” Has anyone else noticed this similarity and wondered about it?
I know that satan seems to be mocking God in His triune nature with the 2 unholy trinity of the false prophet, satan, and the anti-christ. 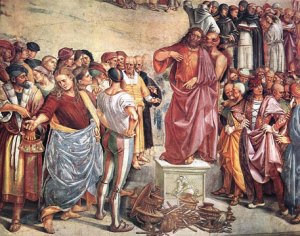 I know that satan is a created being and so are the members of the unholy trinity, as such they are subject to God. They can only go as far as He allows.
The similarity between the two verses seems it could be another instance of defamation against God. God gave the law to Moses and Israel for their good. It was later used by them as a means to an end. It became a works righteousness system. They thought by obeying in their deeds they would please God. There is a religion today that is a works righteousness faith and a totalitarian replacement government all rolled up into one, and their eschatology interestingly resembles ours. Except their Christ figure is our anti-christ.
If you guessed islam, you are correct. That is the faith I am talking about. If you are not muslim and you live in a muslim land you already have trouble doing business and buying food. I wonder what a future islam would look like if it were world wide and influenced by the cultures it conquered? 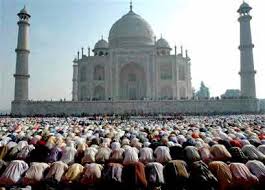 A world system and a religion combined, in complete tyrannical control. They already kill Christians and Jews for their god. What would a secularized and modernized islam look like? Just random thoughts from Bob.