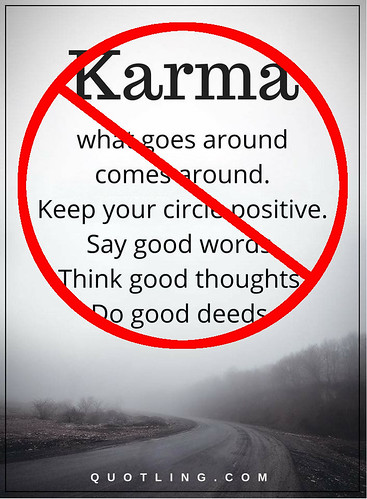 The problem with the Hindu idea of karma is that it relies on some universal force without intellect, or reason, that isn’t a person, to keep track of all the wrongs every person does, and then dole out justice. We seem to readily accept this notion, but rule out the Biblical standard of, “You reap what you sow.” In this notion, there is an all knowing, all powerful, perfectly intelligent, flawlessly reasonable, perfectly just and righteous judge, who knows every sin, of every person, and then uses those people in their sinfulness, to accomplish His will. We know from reading the Old Testament, that when Israel sinned, God would punish them by using a sinful pagan nation to come in and militarily defeat them, or enslave them. This was God using sinners to punish sinners in His sovereign will. This would cause Israel to see their sin, because they believed in Him and knew that they were being disciplined for their sins against Him. They would then repent, and turn back to Him. When we are being disciplined for sin, we should do the same thing. Repent of our sins, turn to Christ, and believe on Him and His work on the cross to justify us to God. We should not trust in our goodness, which is actually not goodness at all when compared to the perfect goodness of God, but rather it is sinful unrighteousness. We need to give up on karma, which is a Hindu belief, and trust in the One true and living God, Jesus Christ.

” 6The one who is taught the word is to share all good things with the one who teaches him. 7Do not be deceived, God is not mocked; for whatever a man sows, this he will also reap. 8For the one who sows to his own flesh will from the flesh reap corruption, but the one who sows to the Spirit will from the Spirit reap eternal life. 9Let us not lose heart in doing good, for in due time we will reap if we do not grow weary. 10So then, while we have opportunity, let us do good to all people, and especially to those who are of the household of the faith.”

Absolute truth can only be known totally, perfectly, and absolutely by the transcendent being who is the origin of that truth. His creatures, by their nature as lesser beings, created by Him, can only know what He has made them capable of knowing. This is also true of their ability to perceive, reason, understand, and communicate.

Then we must factor in the effect the curse had on Adam’s progeny due to his sin in the garden. We are born enslaved to a sinful nature, and are destined to suffer injury, disease, and death due to his sin, known as original sin, and our own individual sins. Sin also has affected the way we perceive, reason, understand, and communicate. This is known as the, “noetic effect” of sin.

When we consider these two ideas, it might seem that it is impossible for us to know absolute truth. This would be incorrect. God has made us able to know of absolute truth, just not perfectly, absolutely, or totally. We can know that God exists, fire burns, and the wind blows. We can even understand how combustion works, and what the source of the wind is, but to know them as God does is impossible in our current state and even in our glorified state.

If you look at an apple on a desk, you’ll see an apple. If you use a magnifying glass, you’ll see the pores on the skin as well as the blemishes. If you use a microscope, you’ll be able to see the cells of the apple. Advanced technology allows us to look at the micros and macros of the cosmos in ways that were never before possible for us. No matter what technology we develop, we will never be able to perceive things the way that God does.

God wants us to know Him. He has given us the creation to see His work. He has given us the progressive revelation of His word for us to know Him. In the person of the Holy Spirit, He makes His word understandable to us. In the person of Christ Jesus, He has made it possible for us to be justified to Him, to be adopted as sons and daughters. The Bible says this about Jesus, “…He is the image of the invisible God…” (Col 1:15) It also says, “…For in Him all the fullness of Deity dwells in bodily form…” (Col 2:9)

If you’d like to know absolute truth, in as much as you can, I encourage you to think about your guilt as a sinner. Consider how holy God is as the sovereign Creator of everything. Think about His perfection in all of His attributes. Repent of your sins. Forsake them. Turn from them towards Christ. He is your only hope. “…let it be known to all of you and to all the people of Israel, that by the name of Jesus Christ the Nazarene, whom you crucified, whom God raised from the dead—by this name this man stands here before you in good health. “He is the STONE WHICH WAS REJECTED by you, THE BUILDERS, but WHICH BECAME THE CHIEF CORNER stone. “And there is salvation in no one else; for there is no other name under heaven that has been given among men by which we must be saved.”…” (Acts 4:10-12) “…Behold, now is “THE ACCEPTABLE TIME,” behold, now is “THE DAY OF SALVATION”…” (2 Cor 6:2)