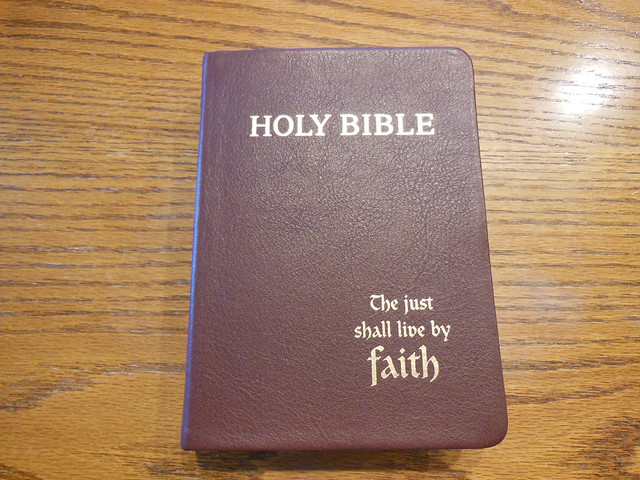 Trinitarian Bible Society really hit it out of the park on this one folks.  It is by far, one of my most favorite personal size reference Bibles, regardless of all the different translations out there.  This is a Reformation Commemorative edition.  It is in celebration of the 500th year anniversary of the Protestant Reformation. (1517-2017) It utilizes a compact version of the Westminster Reference Bible typesetting, including notes, and layout.  I loved the full size Westminster Reference Bible from TBS.  You can read my review of that Bible here.

As usual, T.B.S. did a wonderful job of packaging the Bible for shipping.  It was well protected.  The retail/presentation box is a clamshell, one piece design.  It is decorated with a picture of Wittenberg Market Square, home to St. Mary’s, where Luther posted his 95 Thesis demarking the start of the Reformation. 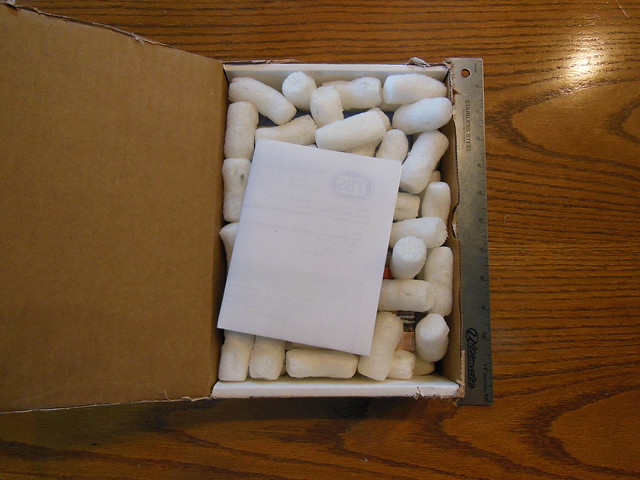 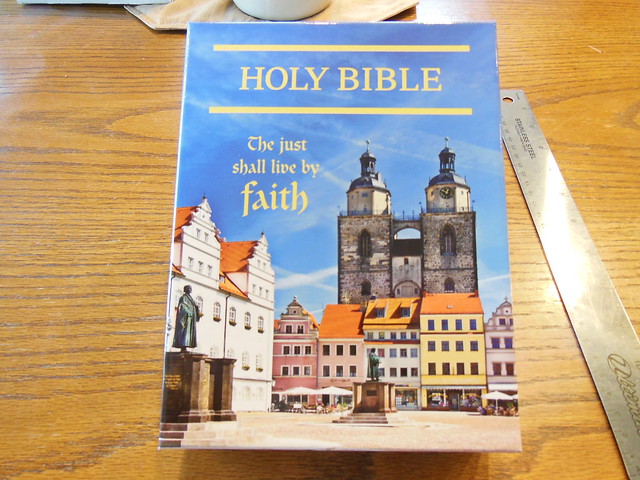 The paper looks similar to the Clarion as well.  This is not a surprise as Jongbloed produces both of these Bibles.  There is some slight page curling.  To me that isn’t necessarily a bad thing.  It makes it easier to turn the pages.  Some people really hate page curling, not a big deal to me unless it is extreme.  According to T.B.S. the paper is 32 g.s.m.  That is pretty heavy and thick compared to many similarly sized Bibles.  The paper has a smooth texture to it.  The pages are combined into signatures and smyth-sewn into the spine. 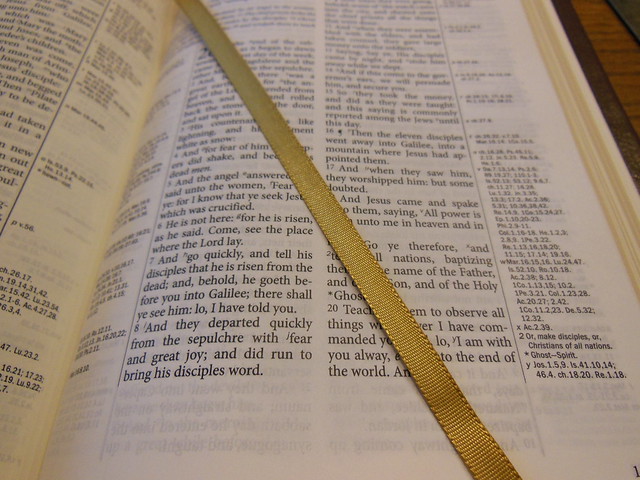 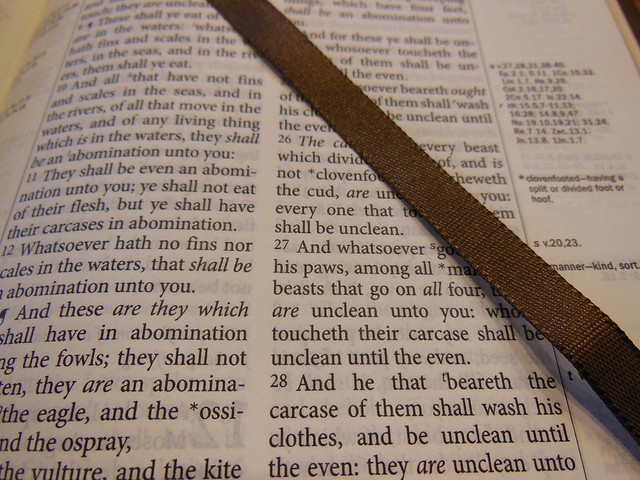 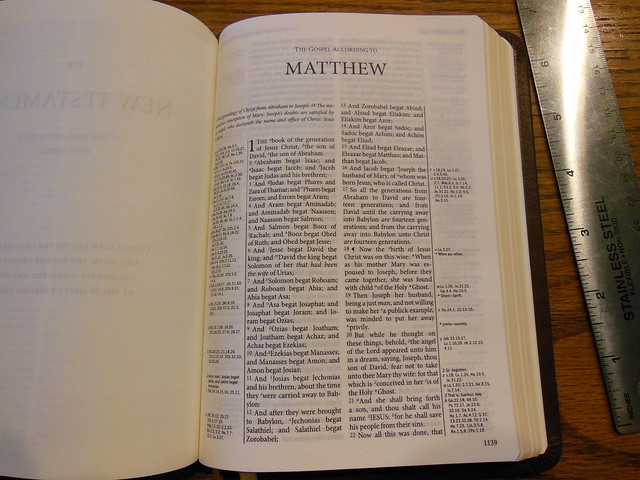 I am impressed with all of the aspects of this Bible.  The printing, binding, paper, cover, and references are all terrific!  The only drawback is the smallish 7.3 pt. font.  The references are 4.5 pt.  That being said, since Jongbloed did such an exemplary job with the printing, the text isn’t that hard to read.  The type is clear, sharp, and boldly printed on the off white paper.  This makes it easier for the old eyes to focus on.  If you have bad eyesight this is NOT the Bible for you.  Keep in mind that while it is of the highest quality, the font is still on the small side for many people. 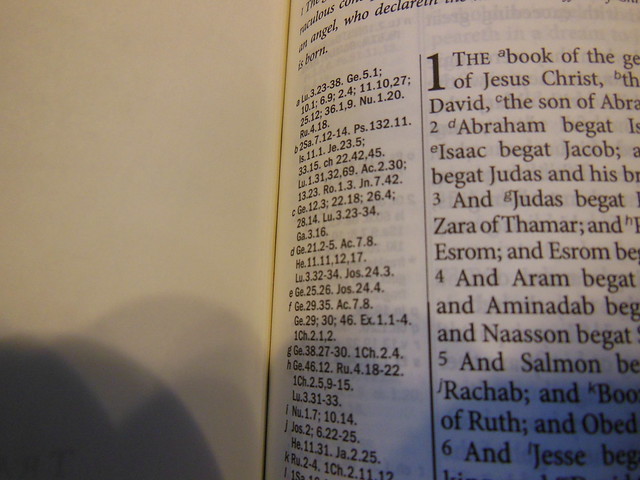 If you are not familiar with the Westminster Reference edition, it is a black letter, dual column, verse format Bible with the cross references in the gutter and margin of the page.  There is a vertical line bordering the dual column text from the references.  The Book and Chapter numbers are at the top outside corner of the pages, with the page numbers on the bottom outside corners.  New paragraphs are denoted with a pilcrow.  One of the most helpful features of the Westminster is that the archaic words are marked with an asterisk in the text.  If you look in the margin for the asterisk, you will find the word and a modern word or short definition that explains it. 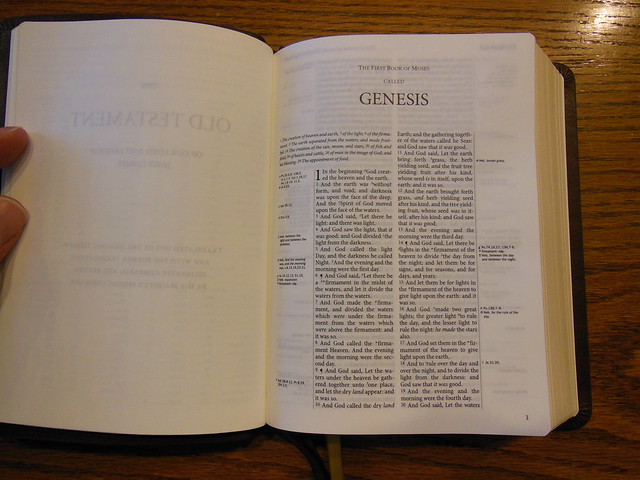 This edition is covered in a supple brown Meriva calfskin leather.  It has a slight natural grain, that is soft to the touch.  This Bible is case bound with standard vinyl covered paper that is brown, to match the leather cover.  The corners are well done, as you would expect from Jongbloed.  T.B.S. made the right decision having them do the job.  The spine of the Bible is ornamented with, “Holy Bible” at the head, “1517-2017 Reformation Commemorative Edition” in the middle, and the T.B.S. logo at the foot.  The front cover has, “HOLY BIBLE” at the top and, “The just shall live by faith” offset to the bottom right corner.  The page edges are gold gilt.  There are four ribbon markers.  Two are brown like the cover.  They are first.  The last two are gold colored.  The decorative head and tail bands match the ribbon colors of brown and gold. 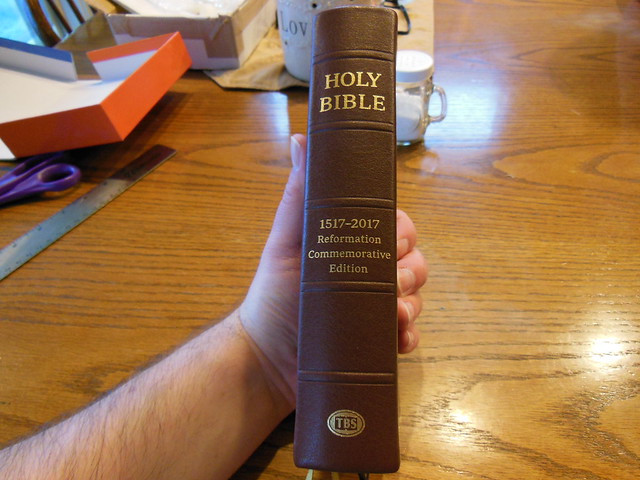 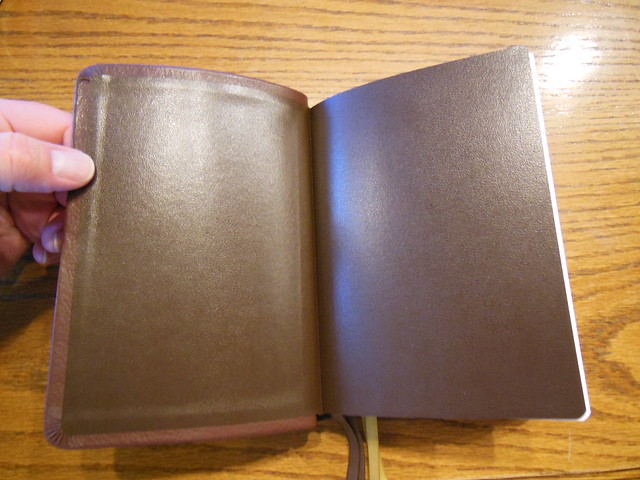 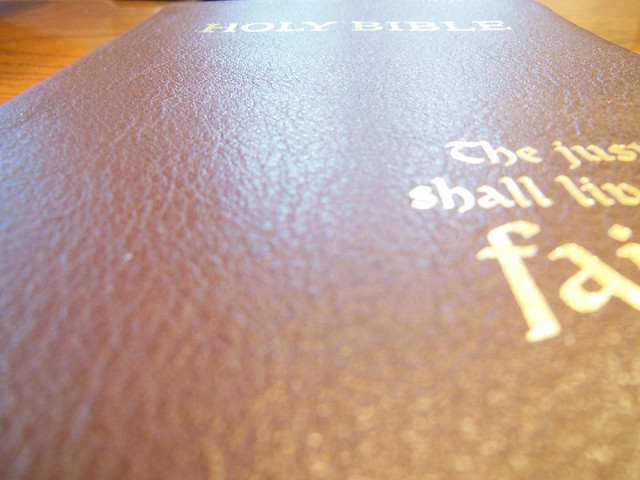 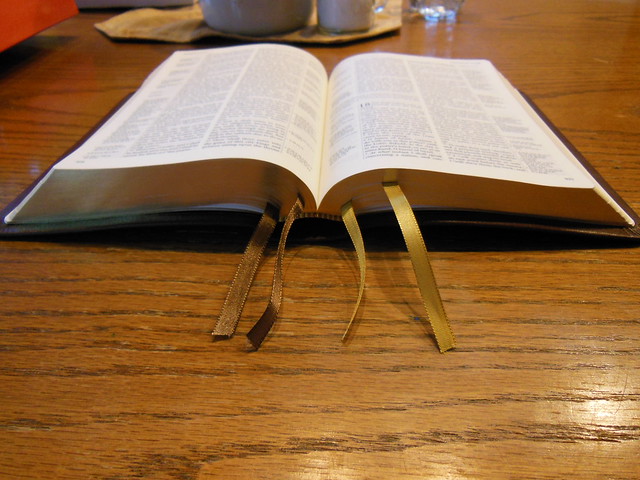 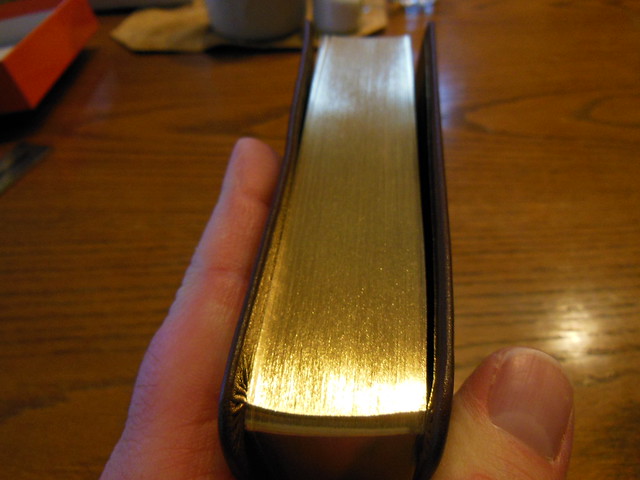 In the front of this Bible you’ll find a Gift presentation page and The Epistle Dedicatory.  After the presentation page is a short history of the Reformation, and Bible translations that came out of it.  There is also a section on how to utilize the features of this Bible.  In the back you won’t find a concordance, but there is a table of weights and measures, a word list, and two year daily reading plan.  After those features you’ll find some usefull colored maps as well as several pages of blank paper for notes. 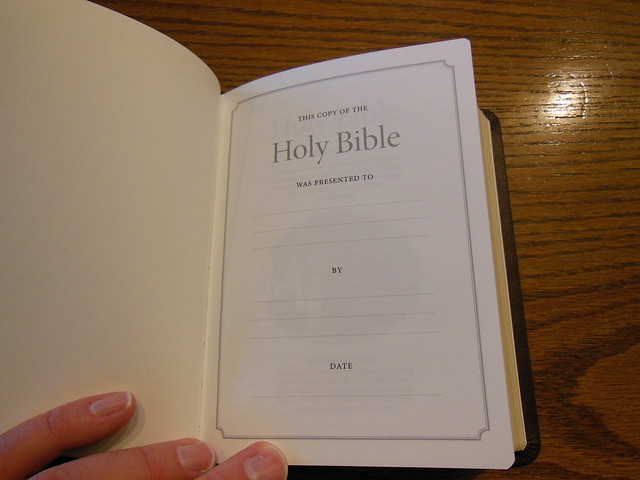 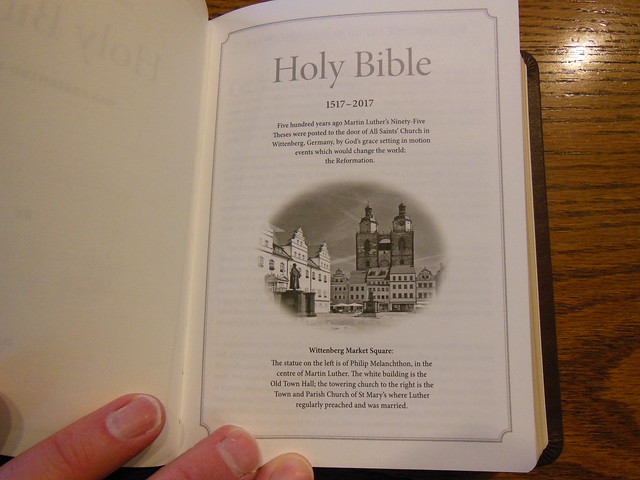 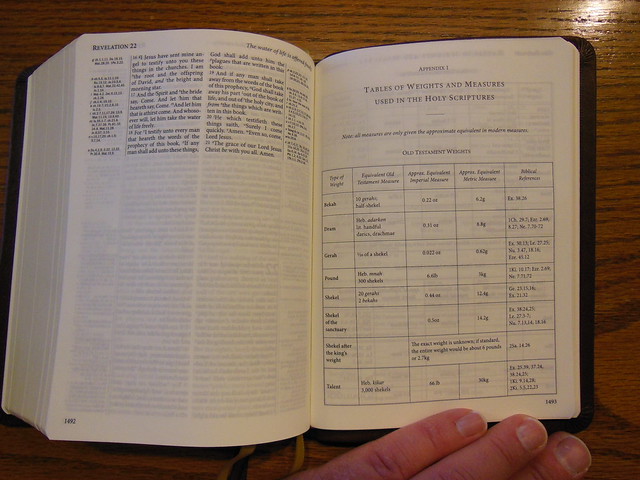 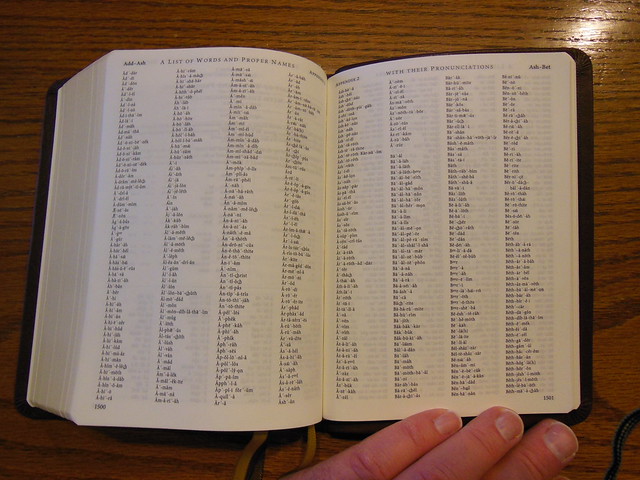 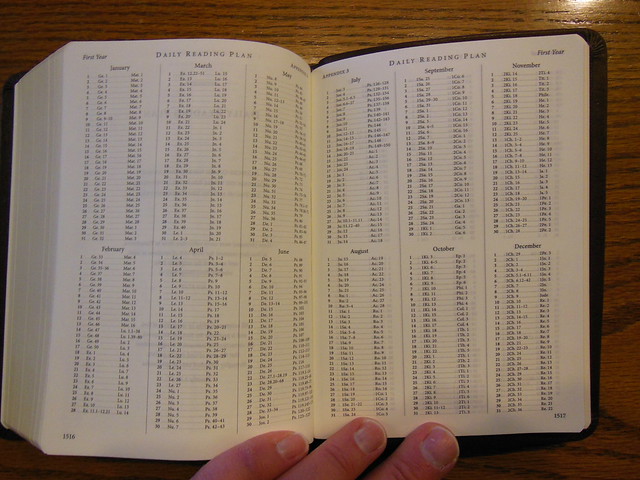 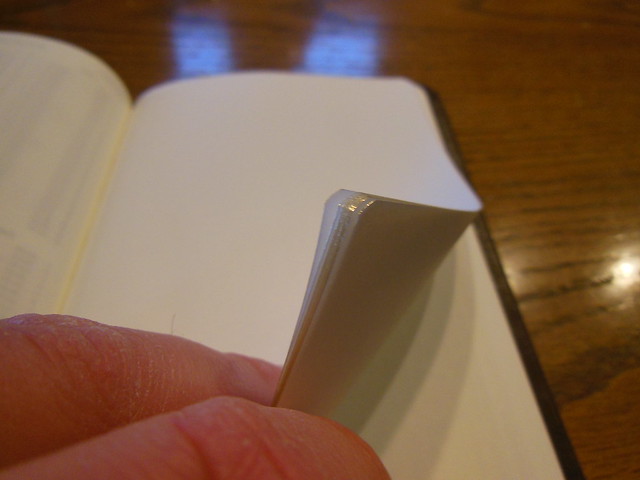 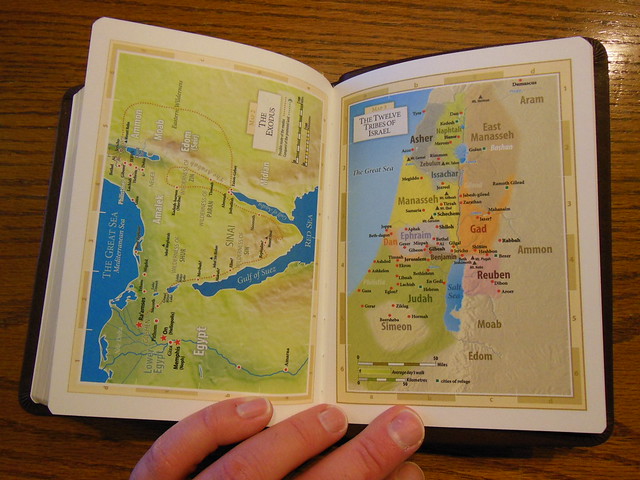 If you are a fan of the KJV, and are looking for a high quality, personal sized compact reference Bible look no further.  You can’t go wrong with this Bible for the price.  I’ve rarely seen this quality of work done for less than $100.00, but you can purchase this Bible from T.B.S. for $64.00  That is an amazing deal in this reviewer’s opinion.  If you’d like to have it for even less, you can order it from Reformation Heritage Books for $44.00, but remember that T.B.S. uses the money they make to provide Bibles to people all over the world who can’t otherwise get them.  Make sure to check out the pictures I took of this Bible on my Flickr page. 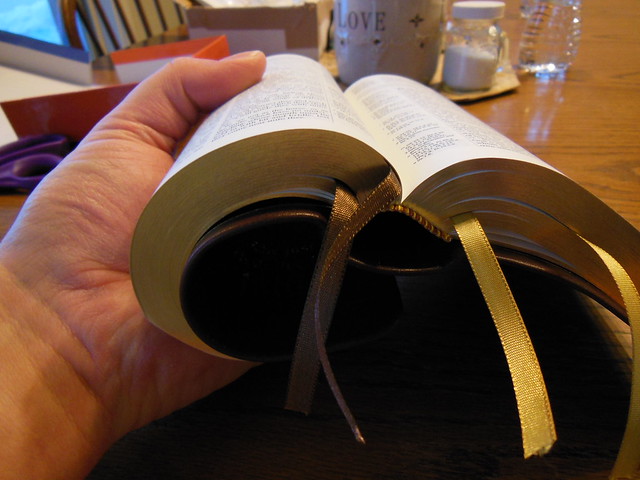 Here is an excerpt from the product page on the T.B.S. site; 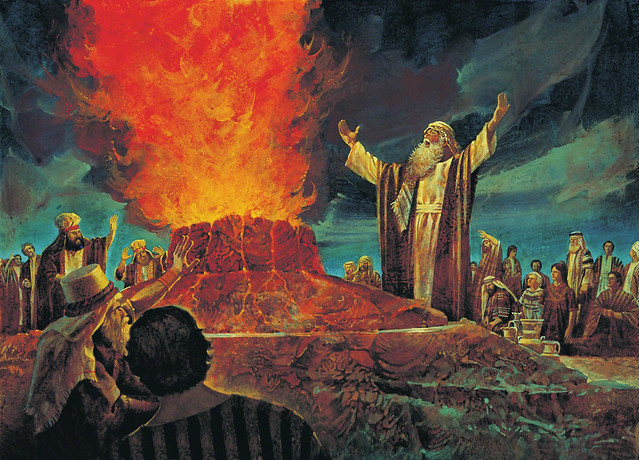