Is it because I give to the needy? Is it because I am compassionate to the undeserving? Is it because I help the sick at my own peril? Is it because I endure your ridicule? No, it is because of Jesus.
As a Christian who shares the gospel, I have experienced the hate of some. Don’t misunderstand me. There are some who will earnestly listen to the gospel. Out of those most don’t repent and believe, but at least they were genuinely interested in listening to what I had to say. There are others who feign interest. Some just walk away while they shake their heads and mumble. I’m not talking about any of these types. I am talking about the type who get outraged that you would even dare to mention the, “J” word to them! The people who get so angry that you are afraid they might punch you in the face. It is as if you burned their house down or something. These are the types I am talking about.

We all know that the Bible tells us we will be hated and mistreated, but until it happens to you it is difficult to grasp why. You might see yourself doing all kinds of benevolent things and loving on people like no bodies business, so it is a shock to you when someone hates you. Jesus said, “…32Jesus answered them, “I showed you many good works from the Father; for which of them are you stoning Me?” 33The Jews answered Him, “For a good work we do not stone You, but for blasphemy; and because You, being a man, make Yourself out to be God.”…” in John 10:32-33 (NASB) This often sticks in my head. Jesus’ biggest offense was to claim to be God. Some of the Pharisees hated Him for this. It was a good reason to stone Him to death according to them. We can see this same attitude today towards our brothers and sisters in Christ. Think about it for a moment. All of the kind loving things you have done in Christ’s name, poof! Vanish in a moment out of the memory of the hateful person who recoils at the mention of Jesus. It is all fine and dandy as long as you are being benevolent, but mention the reason why you are being loving and merciful and watch out. The next thing you might see could be a rock headed for your noggin. It just doesn’t compute to us right off why someone would respond like that, but we have to look at some truths to understand. If a person is not saved they are a friend of the world. James 4:4 says, “…You adulteresses, do you not know that friendship with the world is hostility toward God? Therefore whoever wishes to be a friend of the world makes himself an enemy of God. …” So if you are God’s child how do you suppose the enemy will desire to treat you? In John 15:18-20 Jesus says, “…18“If the world hates you, you know that it has hated Me before it hated you. 19“If you were of the world, the world would love its own; but because you are not of the world, but I chose you out of the world, because of this the world hates you. 20“Remember the word that I said to you, ‘A slave is not greater than his master.’ If they persecuted Me, they will also persecute you; if they kept My word, they will keep yours also.…” It makes me wonder if we aren’t too concerned with having easy or being well liked. I mean, nobody likes to get hurt or suffer right, but Jesus was pretty clear about capitulating and being a friend of the world. Cheer up though, if you are sharing the gospel in the face of this suffering Jesus also said this to His disciples, “… 21“Brother will betray brother to death, and a father his child; and children will rise up against parents and cause them to be put to death. 22“You will be hated by all because of My name, but it is the one who has endured to the end who will be saved.

23“But whenever they persecute you in one city, flee to the next; for truly I say to you, you will not finish going through the cities of Israel until the Son of Man comes. …” If we learn from their example, we can see that all, but John was martyred for their testimony of Christ crucified. They persevered all the way to the end. We can to with God’s grace.

The 1611 KJV edition is not a true facsimile edition. It is a modern printing of a 19th century typeset that changed the font from Gothic to Roman. It is still in early Modern English. Here is what Hendrickson has to say about it on their product information page,

“For 400 years, the Authorized Version of the Bible—popularly known as the King James Version—has been beloved for its majestic phrasing and stately cadences. No other book has so profoundly influenced our language and our theology. Over time, however, the text has suffered subtle and occasionally troublesome alterations. This edition preserves the original 1611 printing. Word for word and page for page, the text with its original marginal notes, preface, and other introductory material appears as it first did. The sole concession to modernity is a far more readable roman typeface set by nineteenth-century master printers.

“A valuable and essential addition to every Bible library.”

Here is a list of features from their page as well,

• Clear type is convenient to read and reference

I was curious about the quality of the leather when I requested this Bible for review. I wondered what they were going to use. I was also curious about how and where they would have it printed and bound. I thought, “Perhaps because this is an anniversary edition they will give it special treatment? Surely for the steep price it has to be better built than some of the lesser Bibles I’ve seen recently.” Well, I was let down. When I opened the cardboard shipping box I was presented with a nice looking retail box. 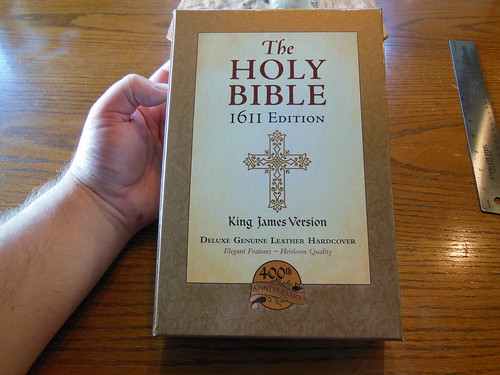 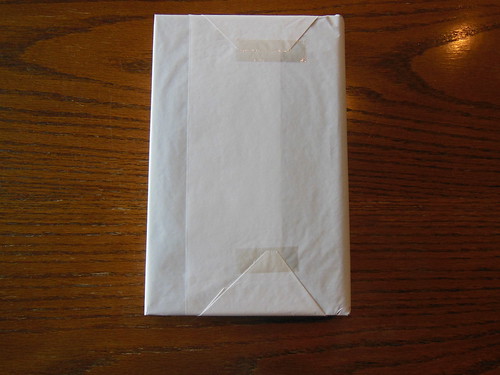 I was hopeful it contained something well done. I opened the retail box hoping to smell leather. Nope! No pleasing leather aroma. That is not to say that the cover is not genuine leather. It most likely is. Hendrickson says that it is. That being the case, the only way they can consider it genuine leather is if it is pigskin leather. Pigskin leather is the cheapest, stiffest, thinnest, leather you can get. Any cheaper and they would be using bonded leather or synthetic covers. The leather covers hardback book boards. There is a nice looking cross decoration on the front cover. It is not tooled leather. 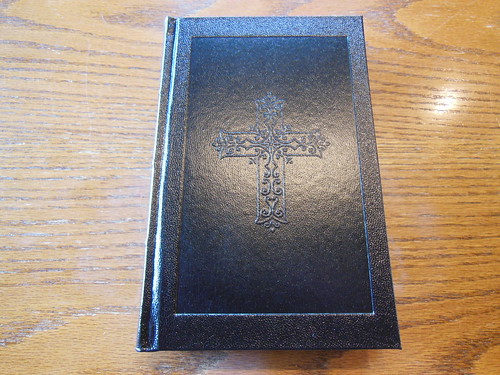 The next thing that struck me was the excessively wavy page edges. It looks as if when the text block was trimmed they used a dull blade or when they were finishing the text block they had a machine problem. I don’t know for sure. I have also noticed a reviewer on a large retail site had the same problem. 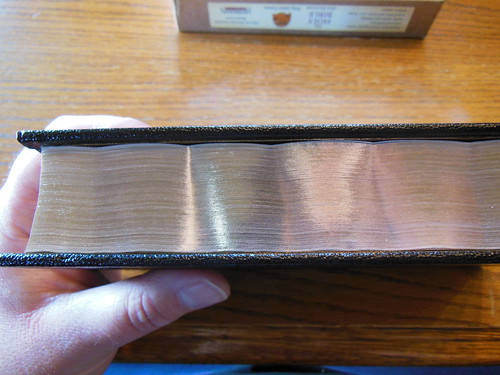 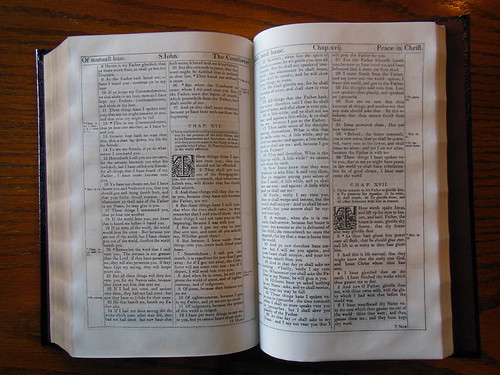 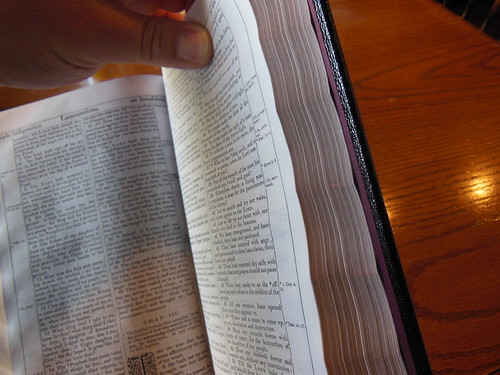 After noticing these two very big disappointments, I concluded that this must have been made in China. I opened it up. I looked for the publisher information page and confirmed my suspicions. 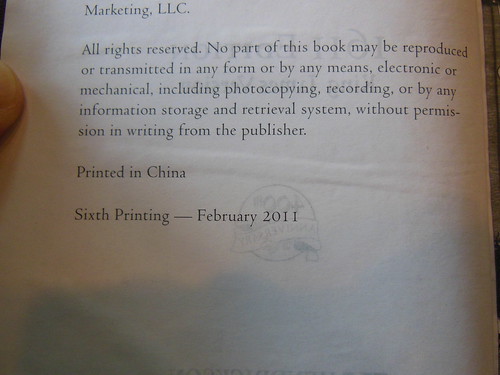 I really hope the publishers of Bibles realize they are dealing with God’s word, not just a retail product.

Those were the two biggest gripes I had about this Bible as far as obvious design and construction goes. I can’t criticize the typeset or layout as it is dictated by the 19th century typeset they chose to utilize. I know some have complained the font to be small. It is a bit on the small side, but overall, not bad. 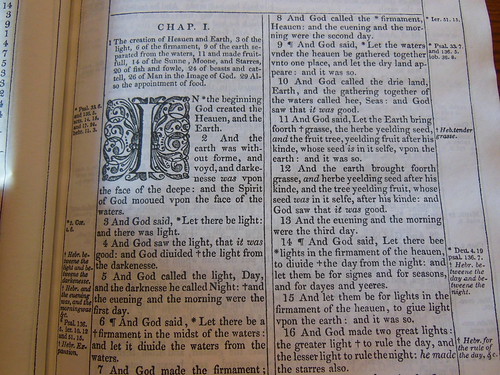 You have to remember what you are dealing with, an old typeset and layout, which includes the Apocrypha. 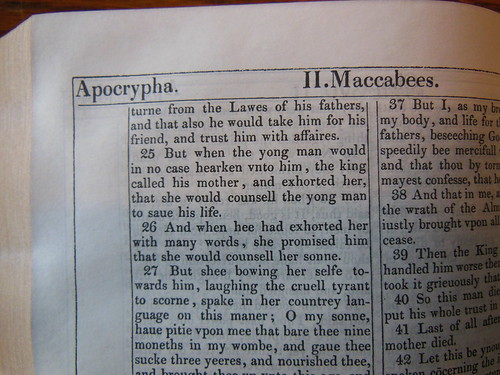 If you aren’t familiar with it, don’t feel bad. Most people have no idea what it is. It is a collection of non-canonical books the early Church used might have used (kind of like how we use other books in our studies) We don’t use them, because they aren’t inspired. If you are looking for a modern paragraph format Bible with side column references, then buy a modern Bible… That should go without saying. Alas, people are very indiscriminate when shopping sometimes. They can also be woefully ignorant about what they are buying. That is one of the main reasons I write these reviews. ￿ I hope to help shoppers find the perfect Bible for them. Then they can go out and purchase confidently without apprehension.

I opened the case bound Bible to see that even though it isn’t the quality I hoped for, they did at least do a decent job pasting down the corners and the end pages. 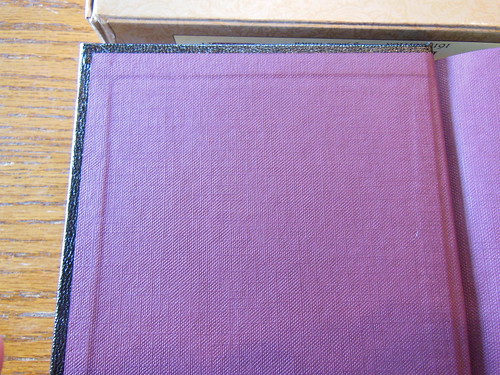 The paper and printing are next. The paper reminded me of cheap newsprint paper in color and texture. 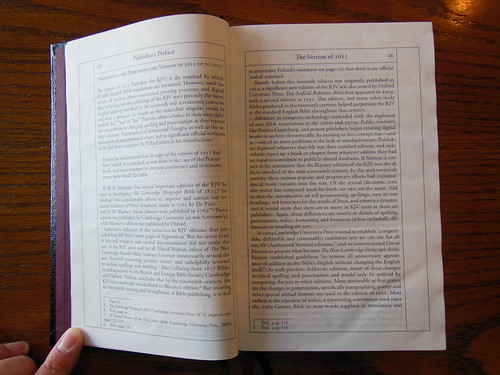 It was a bit smoother and higher quality than newsprint, but definitely not up the standards of Hendrickson’s competition. The Spine of the Bible was rounded, which is a good thing. 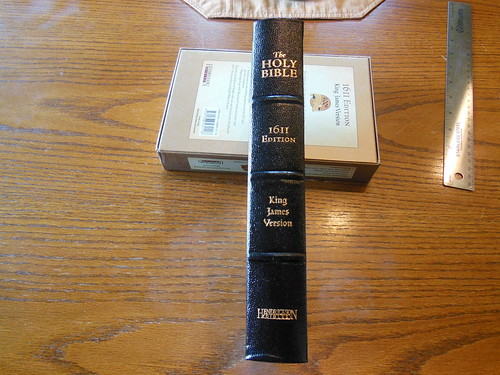 The binding is sewn, giving it the ability to open flat and stay that way while reading it. The page edges were gilt, even if they were warped like a Ruffle’s potato chip. The ribbon markers were decent. 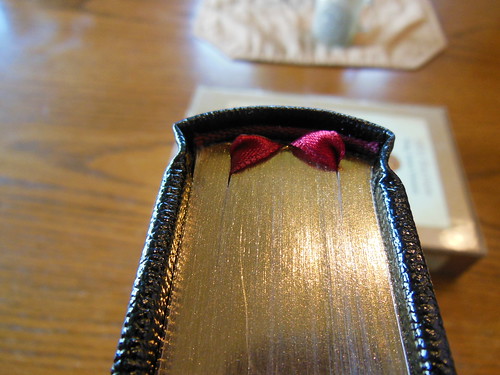 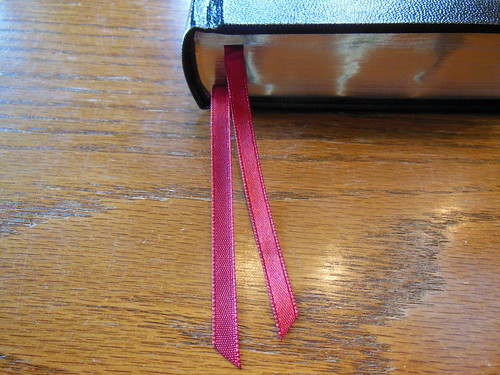 There are decorative head and tail bands. The print seemed consistent, even if it smudged a little. I love some of the Books and Bibles Hendrickson publishes, but this one doesn’t make the cut. If this Bible were only available at the suggested retail price I wouldn’t buy it, but you can pick it up online around the fifty dollar range. In my opinion, even fifty dollars is thirty dollars too much.
To see all the pics make sure to check out my flickr album of this Bible.