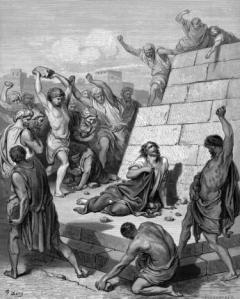 Proof-texting is the practice of quoting a verse, or verses from the text of the Bible, to support, or refute a doctrine.  This practice has been used by the orthodox and the heretic.  The dangers of proof-texting are varied and manifold.  With proper presuppositions proof-texting can be a valuable tool for supporting orthodox doctrines.

With this presupposition when they run into texts like John 3:16 “…For God so loved the world, that He gave His only begotten Son, that whoever believes in Him shall not perish, but have eternal life…”  They wrongly understand the word, “begotten” to mean that Jesus was the progeny of the Father.  They then, in turn use this as a proof-text for their false doctrine that deny the eternal deity of Jesus, in stark disregard for His proclamation of being the, “I Am.”  This, in turn requires more eisegesis, and proof-texting, in an attempt to refute the true doctrines, in conflict with their false ones.  When apologetically engaged with a heretic or cult member they are usually more than thrilled to proof-text ad nauseum.  This can quickly become counterproductive.  If this is done in a public forum it can be disastrous.  The onlookers could be convinced of the heretical doctrines.

Our apologetics should be from a capable well rounded understanding of the entire Bible in its own context.  It should be founded on the presupposition that the Bible is the truth, and the authority, on What God has to say to man.  When we start with a true presupposition, and are exegetical in our reading of the Bible, we can proof-text like Paul to the Jews in Hebrews.  When proof-texting is done correctly it can win people’s minds to the truths of the Bible.  There is nothing like a good section of scripture quoted in context at the right time to hammer home sound doctrine.  God’s word is authoritative and when we speak truthfully with the authority of scripture it is a powerful thing to witness.